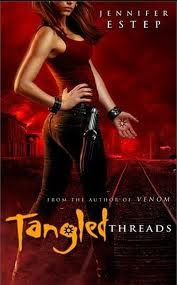 I’d rather face a dozen lethal assassins any night than deal with something as tricky, convoluted, and fragile as my feelings.

But here I am. Gin Blanco, the semi-retired assassin known as the Spider. Hovering outside sexy businessman Owen Grayson’s front door like a nervous teenage girl. One thing I like about Owen: he doesn’t shy away from my past—or my present. And right now I have a bull’s-eye on my forehead. Cold-blooded Fire elemental Mab Monroe has hired one of the smartest assassins in the business to trap me. Elektra LaFleur is skilled and efficient, with deadly electrical elemental magic as potent as my own Ice and Stone powers. Which means there’s a fifty-fifty chance one of us won’t survive this battle. I intend to kill LaFleur—or die trying—because Mab wants the assassin to take out my baby sister, Detective Bria Coolidge, too. The only problem is, Bria has no idea I’m her long-lost sibling . . . or that I’m the murderer she’s been chasing through Ashland for weeks. And what Bria doesn’t know just might get us both dead. . . .

Gin Blanco, aka the Spider, just can't get away from the assassination business. She spends her days running The Pork Pit the restaurant left to her by her foster father---and mentor---Fletcher Lane upon his death. While cooking up barbeque for the citizens of Ashland keeps Gin busy, she is still called upon to become her alter-ego, the Spider. After all, there's always some evil doer who needs to permanently disappear. But right now, Gin is the primary target. Mab Monroe, the fire elemental who practically runs and controls Ashland---and the one who murdered Gin's mother and sister---has been trying to have Gin killed for quite awhile, but all of the other assassins she sent to do the job have died. This time she brings Elektra LaFleur---one of the best in the business---to town to rid the world of the Spider once and for all. Elektra is the most powerful elemental Gin has ever seen, and if she's going to prevail Gin will need not only her own elemental powers, but the strength of those she loves.

Gin's current love interest, Owen Grayson accepts her fully for who she is, warts and all. But Gin still thinks that one day he'll wake up and realize he doesn't want a relationship with an assassin and he will leave her. She's been burned before by her previous lover, cop Donovan Caine, who couldn't handle the fact that Gin was an assassin. Owen is nothing like Donovan, however, and Gin eventually sees that he cares for her as deeply as she does for him.

"You used up all your magic to find me last night."

Owen shrugged as though it was nothing. But it wasn't nothing to me. Besides Finn and the Deveraux sisters, I couldn't even remember the last time someone had cared enough to come looking for me when I was in trouble. I was so used to being on my own for so long, always being the tough, strong, capable one, that I'd forgotten how nice it felt to have someone else look out for me.

To have someone else care about me.

And just like that, the fragile strings of my feelings for Owen joined together, all the tangled threads wrapping around and weaving their way through my heart. Scary and painful in some ways, but necessary in others too.

I have been caught up in this series from the very beginning, as thoroughly as the proverbial fly in the spider's web. Gin Blanco is a complex and utterly fascinating heroine. She give "kick butt" a whole new meaning, and her strength is most definitely part of what defines her. But deep down there is a vulnerability that touches your heart. Afraid to love Owen for fear that he will eventually reject her. And she feels the same way about her sister, Bria. Knowing that she will eventually have to tell her the truth about her identity, Gin's biggest fear is that Bria will never be able to accept her past and present identity. Only time will tell.

Jennifer Estep is a brilliant storyteller, and I revel in each book of her Elemental Assassin series. Lucky for me and the rest of her fans, there's another book coming: Spider's Revenge will be released September 27th. To get the most out of this action packed, never-a-dull-moment series, it really should be read in order: Spider's Bite, Web of Lies, Venom, and Tangled Threads. Start reading and let the addiction begin.