His name is Cougar. Just Cougar. He’s the latest of Kathleen Eagle’s strong, stoic Indian cowboys who need love’s healing touch. Cougar is a former soldier recently released from a VA hospital where horse therapy helped him recover from physical and psychological wounds of war. At the suggestion of his friend Sergeant Mary Tutan, he’s visiting the Double D Wild Horse Sanctuary in South Dakota to check out the wild horse training competition run by Sally Drexler White Horse.

Cougar meets schoolteacher Celia Banyon when he almost runs down her young son Mark. He is drawn to both mother and son, two more wounded warriors even though their battleground has been a domestic one. Cougar and Celia move from friendship to love, and Cougar helps Mark bond with a horse. The breakthrough when Cougar and Celia trust one another enough to admit their love is quieter but no less powerful than the breakthrough when Mark, who has been deaf and mute since a horrific accident, names his horse Flyboy.

These are not showy characters, but their vulnerabilities and their strengths make them deeply human. They survive pain, betrayal, and broken dreams to discover a love strong enough to heal their wounds. My only disappointment in this book was that it ended too soon, making the HEA feel a bit rushed. Some of the best contemporary romances being written are category romance, and Kathleen Eagle’s books are in that company. I recommend not only One Brave Cowboy but also the other books in the series: In Care of Sam Beaudry; One Cowboy, One Christmas; Cool Hand Hank; Once a Father; and Cowboy, Take Me Away. 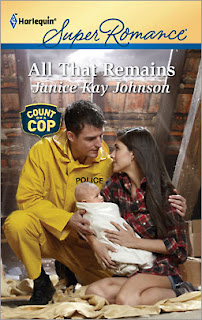 Wren Fraser is on the run, hoping to find a safe place with her best friend from college, when she’s caught in a flash flood. Her car runs off the road, and she takes sanctuary in an abandoned house. She’s alone in an empty house somewhere in Arkansas, with flood waters rising and labor pains getting stronger and closer together. Retreating to the attic, she hangs a white sheet out the window and hopes help will come.

Police Detective Alec Harper has spent three days rescuing stranded people in a borrowed aluminum fishing boat. He almost skips the old Maynard house because he knows the owner is in a nursing home but decides to check it out on the chance that someone has taken shelter there. He sees the white sheet. He knows there is no way the heavily pregnant woman can make it to the boat, and so when he learns she’s in labor, he joins her in the attic and delivers her baby.

The intimacy created by this act is intensified as their isolation continues. Wren tells Alec about the father of her child, the abusive boyfriend from whom she is running, and Alec tells her that he and his ex-wife have two daughters. By the time they are rescued after several days in survivalist mode, a bond has formed between the two. When Wren finds out that her friend no longer lives in Saddler’s Mill, Alec invites her to be his guest until her identification and credit cards can be replaced. With the connection that has already been created between Wren and Alec, it’s no surprise that the two fall in love. But Wren is determined to prove she can be independent of any man, and Alec is afraid of letting anyone inside the walls he’s built to protect himself from more losses. They can build a life together only of Wren overcomes her pride and Alec overcomes his fears.

Janice Kay Johnson has been an autobuy author for me since I read her Patton’s Daughters series in 1999. I have learned that I can count on her books to give me well-developed characters with depth who confront credible challenges and are changed by their experiences. All That Remains is vintage Johnson, and I highly recommend it.