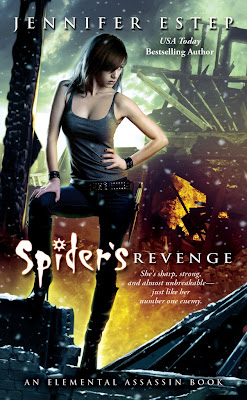 And I plan on murdering someone before the night is through.

Killing used to be my regular gig, after all. Gin Blanco, aka the Spider, assassin-for-hire. And I was very, very good at it. Now, I’m ready to make the one hit that truly matters: Mab Monroe, the dangerous Fire elemental who murdered my family when I was thirteen. Oh, I don’t think the mission will be easy, but turns out it’s a bit more problematic than expected. The bitch knows I’m coming for her. So now I’m up against the army of lethal bounty hunters Mab hired to track me down. She also put a price on my baby sister’s head. Keeping Bria safe is my first priority. Taking Mab out is a close second. Good thing I’ve got my powerful Ice and Stone magic—and my irresistible lover, Owen Grayson—to watch my back. This battle has been years in the making, and there’s a good chance I won’t survive. But if I’m going down, then Mab’s coming with me . . . no matter what I have to do to make that happen.

Gin's showdown with the evil Fire elemental Mab Monroe has been building since the first page of book one (Spider's Bite), and I have been waiting with bated breath for Gin to kill Mab, slowly and with a great deal of pain. Whew! I sound almost as bloodthirsty as Gin, but if you've read any of the books in this fantastic series you most likely feel the same way. Mab puts the 'E' in evil, and it's high time she gets what she deserves.

Gin is the Spider, and her reputation as an assassin is unparalleled. She has been patiently planning her nemesis, Mab's demise ever since Mab killed Gin's mother and sister when Gin was thirteen years old. Just like the spider she's named after, Gin knows that her patience will pay off when it comes to getting her prey. So when she blows a prime opportunity to assassinate Mab, Gin knows that she is going to have to work harder the next time...if the score of professional bounty hunters--- that Mab has brought to Ashland to hunt down Gin and her sister Bria--- don't get her before she gets Mab.

The last thing Gin wants to do is put those that she loves in danger, but they refuse to let her take on Mab alone. She is as about as tough as they come---hello, she's an assassin---but when it comes to her friends, her foster brother, her baby sister Bria, and her lover Owen Grayson, her heart is marshmallow soft. But Gin has to push those feeling deep down and become the cold-hearted, nerves-of-steel Spider if she is to defeat Mab and save those she loves from certain torture and death.

Jennifer Estep continues to serve up nonstop action and thrills in the fifth installment of her popular Elemental Assassin series---she made the New York Times bestseller list recently! I was almost certain that Spider's Revenge would be the last in this series, once Mab met her end at the hand of the Spider. That made me happy (Mab would finally be gone) and sad, because I am endlessly fascinated by Gin and the rest of the citizens of Ashland. It's a bit like opening the last present on Christmas morning---you're so happy with all that you received, but a little let down because it's all over. Well, Ms. Estep has pulled a surprise gift from the bag, like a benevolent Santa Claus; this series is not over! The last line just says it all. *g*

The next book, By A Thread, will be released in March 2012 and the seventh book, Widow's Web is set to be released in September 2012. In order to get maximum enjoyment from this series, I recommend reading them in order: Spider's Bite, Web of Lies, Venom, Tangled Threads, and Spider's Revenge. I know I've said it before, but it bears repeating, this really is the best urban fantasy series out there. It is entertainment at it's best.