We love debut authors here at The Romance Dish which is why we're so happy to introduce you to Theresa Romain.  Theresa's debut, SEASON FOR TEMPTATION (read PJ's review here), is a witty, sparkling Regency story that will have you laughing with delight and sighing with satisfaction.  Please join us in giving Theresa a warm,  Romance Dish welcome!

A Recipe for Romance

Thanks for inviting me to blog at the Romance Dish! I’m so delighted to be Today’s Special, and I can’t resist taking the chance to talk about the role of food in my historical romance debut, SEASON FOR TEMPTATION.

We’re all familiar with the connection between food and romance—especially if we’ve seen that famous scene in the movie TOM JONES. (You know the bit I mean, right? It’s this scene.)

But romance writers can use food to set other moods, too. In the Regency, pretty much every social occasion featured some type of refreshment: suppers tucked between dances at balls, dainty sandwiches for callers during at-home hours, sweetmeats and sherry for the late evening hours. Food can become the backdrop for any emotion the writer wishes.

Since my characters were seemingly always eating, mealtimes in SEASON FOR TEMPTATION run the gamut from friendly to awkward to happily-ever-after. In fact, almost every significant meeting in the book is associated with food. 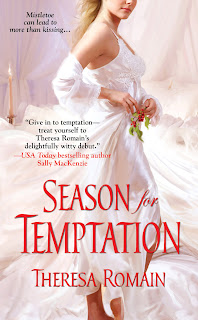 James, Viscount Matheson, tries to cope with a family scandal by engaging himself to the sensible, quiet Louisa. When he travels to the country to meet her family, their first encounter features, as the book’s first chapter’s title warns you, “an unbelievable number of biscuits.”

That first meeting also features the stepsister of his fiancée, and that’s where things get even more complicated than a recipe for pheasant à la braise. Julia is just what James never knew he wanted, and she’s everything he doesn’t need. She’s impulsive and warm—and she’s also Louisa’s closest friend.

Of course, there are more foods to come as the story unfolds. A trout, served before it’s cleaned, gives James an idea of what his future father-in-law is like. A Christmas dinner with James’s mother and sister features several indigestible courses: Subtle Rudeness, Heated Argument, and Chilly Truce. A plum pudding makes an unseasonably late yet very symbolic appearance.

And maybe most significant of all, a strangely spirituous punch unlocks a few tongues and uncovers a few delightful—and painful—truths.

I can promise you two things about SEASON FOR TEMPTATION:

1. The love triangle works out happily. This is a romance, after all!
2. You’ll want a few ginger biscuits at the beginning, and a plum pudding at the end. I don’t have any excuse for this. I just like sweets.

Have you ever seen or read a memorable food-related scene in a book or movie? Tell us about it! I’m offering a signed copy of SEASON FOR TEMPTATION to one random commenter.


Theresa Romain holds degrees in psychology, English literature, and history, an impractical education that allowed her to read everything she could get her hands on. She has worked, interned, and translated for libraries and universities, all of which fed her love of books and her fascination with the past. She lives with her family in the Midwest and lives online at http://theresaromain.com/. You can also find her on Facebook and Twitter.

Order ebook: Kindle • nook
Posted by Andrea at 1:00 AM