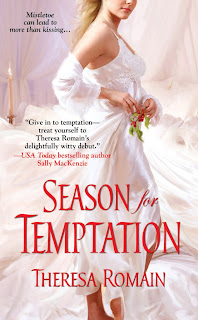 When James, Lord Matheson, arrives for an extended stay at the home of his fiancee, he expects to get to know the family of the woman who will be his wife.  The very last thing he expects is to fall in love.  Duty to his family is his reason for marrying and quiet, proper Louisa Oliver will make a perfect viscount's wife.  True, their engagement is little more than a business arrangement and,  though they like one another,  they don't know each other very well.  Yet James has high hopes for the union...until a petite, muttering ball of energy bursts into the drawing room and turns his life upside down.

James whirled at the interruption, expecting to see the elderly butler who had shown him in a few minutes before.

Instead, a young woman burst into the room at a half-run.  She was muttering loudly, her expression harried and the bodice of her frock askew.

"Curse and drat that girl, drat her.  I knew she hadn't left her music in here, but where could it be?  We'll never find it before the vi--"

As her eyes roved the room, she froze in mid-word upon seeing James.  Her mouth dropped open.  "Urr."


Miss Julia Herington is delighted to meet her stepsister's fiance.  Julia and Louisa have been best friends since their parents married when the two were young girls and they share a bond stronger than many blood sisters.  James is handsome, easy to talk to, has a good sense of humor and will make a wonderful husband.  In fact, Julia would love to marry someone just like him.  But not him.  Of course, not him.  James is engaged to marry Louisa and Julia would never do anything to hurt Louisa.  Her course of action is clear.  Julia must ignore these pesky feelings she has for James, have a Season and find a husband of her own.  Easier said than done.

Louisa, having no idea of the struggle facing both James and Julia, asks her fiance to help find a husband for Julia.  She loves her sister dearly and wants her to find happiness even though Louisa is becoming increasingly certain that she may have made a dreadful mistake in accepting James's proposal.

On the surface this story may sound dark and angsty but, in fact, it is a delightfully witty and sparkling romance with three very likable main characters as well as a quirky blended family (the Olivers) bonded by love.  Julia is an irrepressible bundle of fun who I absolutely adored.  She's a bit naive in the ways of the world and doesn't realize that she's fallen in love with her sister's fiance until it's much too late to change what's in her heart.  Yet, both she and James are determined to do whatever is necessary to avoid hurting Louisa, even at the expense of their own happiness.  For her part, Louisa is also a very likable character who isn't afraid to take matters into her own hands when she realizes her happiness lies in another direction.  And, for those of you who consider cheating a deal breaker (as I do), don't worry.  Ms. Romain has handled this triangle extremely well, with both James and Julia acting honorably.