Guest Review - - Until There Was You

Until There Was You
By Kristan Higgins
Publisher: HQN
Release Date: October 25, 2011 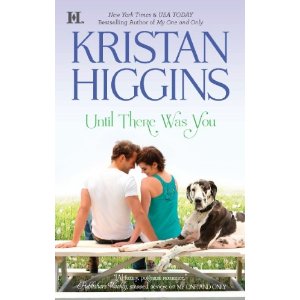 Cordelia “Posey” Osterhagen fell in love with bad boy Liam Murphy when she was fifteen and he was the bad boy with a motorcycle and guitar who was playing the lead in the fantasies of every girl in school. But Liam fell for Emma Tate, a blonde beauty from a wealthy family, and after high school followed her to California where they married.

Fifteen years later Liam has returned to Bellsford, New Hampshire. He still wears jeans and a leather jacket, still rides a motorcycle, and still raises Posey’s temperature with a single bad-boy-radiating look. Despite appearances, however, Liam has changed. He is now a widower with a teenage daughter who has her mother’s niceness and her beauty. His daughter is the most important thing in Liam’s world, and he’s not dealing well with her growing up and dating. In fact, the first time he asks Posey out, his purpose is to spy on his daughter and her date.

Posey’s life is complicated by her competitive cousin Gretchen, a celebrity chef who has moved to Bellsford and plans to renovate and reinvent Guten Tag, the old-fashioned German restaurant owned by Posey’s parents and by Posey’s reawakened interest in the birth mother who gave her away. Then there are Posey’s feelings for Liam. A word from him has a near orgasmic effect on Posey, but half the women in town, including Cousin Gretchen, are pursuing him. Posey is convinced she doesn’t have a chance.

But Liam is discovering Posey is all woman, despite the way she dresses. He finds himself thinking about her too much. If Liam can only accept that being a good father doesn’t mean giving up a life of his own, he and Posey may find their way to an HEA.

I’m a Kristan Higgins fan. Her books always make me laugh and leave me feeling that I’ve met characters I’d love to spend more time with. Until There Was You proved no exception. I smiled, I giggled, I chortled, and I guffawed. Liam’s interactions with his daughter’s boyfriend are terrific, exactly the kind of response one might expect from a former bad boy turned doting father. The elevator scene where Posey thinks Liam is having a heart attack (Actually he’s having a panic attack) is broad comedy at its best.

Once I, a woman who gains ten pounds from smelling a doughnut, forgave Posey for having a metabolism so fast that she has to eat candy bars and ice cream daily, I loved the character. She’s bright and funny and self-deprecating. I also found her job fascinating. She owns a salvage yard, Irreplaceable Artifacts, and builds architectural models of buildings that are being torn down. The only jarring note was her repeated exclamations of “Beiber” and “Holy Elvis Pressley” in lieu of swearing. I found it hard to believe a thirty-three year-old woman who expressed her sexual fantasies so freely would restrict her expletives in such a fashion—even when they are only in her head.

Liam is definitely a swoonworthy hero. To borrow a line from a country song, he’s “a real bad boy” who became “a real good man” with a high S.Q. (Sexiness Quotient) and a tender heart. Some of the best scenes are those between Liam and his daughter that show their love for each other and conflict that is part of a teen’s struggle for independence and a parent’s protective instincts. Since Higgins uses the hero’s point of view (I think for the first time), I felt as if I knew Liam in ways that I have not known her other heroes.

Posey does have a dog, Shilo, a Great Dane, but Shilo plays a lesser role than do the dogs in earlier books. Cat lovers will be pleased that felines (five) get their share of attention. Higgins gives Posey a quirky but loving family. I particularly liked her relationship with her super-intelligent surgeon brother Henry and his partner Jon, a high school home economics teacher.

I really wanted to give this book a five-star rating because there are so many things I love about it, but it has one flaw I could not get past. There are too many secondary characters. I’m a reader who prefers contexts and loves ensemble books, and one of my pet peeves is a hero or heroine who exists in a vacuum with no family or friends. But just a quick recounting allows me to list more than twenty-five characters, a number of whom serve no discernible purpose. I would have been happy to see Posey’s friend Kate and her son, whose relationship hit my ick button, omitted. Until There Was You has many of Higgins’s trademark strengths, and her fans will likely forgive the flaws. I recommend it with the caveat that readers may find themselves lost in the mix of characters at times.

Email ThisBlogThis!Share to TwitterShare to FacebookShare to Pinterest
Labels: 4 Star Review, Contemporary, Guest Review, Janga, Kristan Higgins, Reviews, Until There Was You