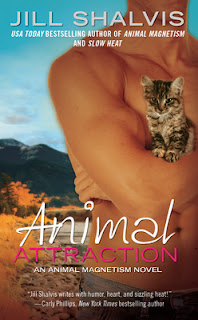 Jade Bennett arrived in rural Sunshine, Idaho eighteen months ago to escape something that happened to her in her hometown of Chicago. Since then, she has worked as the receptionist at Belle Haven, the veterinary clinic nestled in the foothills of the Bitterroot Mountains and run by sexy Dr. Dell Connolly. Jade is good—better than good—at her job, but doesn’t talk much about herself and is quite adept at changing the subject when Dell, his brothers, Adam and Brady, or their friend Lilah asks.

Dell knows that Jade came to Sunshine seeking refuge from something, but his straightforward, no-nonsense receptionist refuses to spill. But Dell understands because he, too, doesn’t like to volunteer much information about his tough life growing up. His mother, a Native American, left when he was young, and then his father died. He moved from foster home to foster home before finally being adopted by a man named Sol who taught Dell (a smart-alecky kid who didn’t give a crap and thought he was tough until he learned the hard way) how to defend himself. Later, Sol died and left everything to Dell and his brothers. Now, Dell is a successful vet and much of that success is thanks to a super-organized Jade. When she tells him that she’ll be leaving to go back to Chicago in a month, Dell doesn’t want her to leave. But is it because Belle Haven runs so smoothly with her there? Or because he can’t stop thinking about her?

Readers met Dell and Jade in the previous book (Animal Magnetism) and could feel the sexual tension between the two. In Animal Attraction, the tension is even stronger but is combined with serious emotion. Yes, Jade and Dell are hot for each other, but they both have significant personal issues to deal with before making a full commitment. Dell is patient with Jade while helping her conquer her fears, and in turn, she helps him work through his abandonment issues. I love the snappy dialogue and fiery exchanges between Dell and Jade, but one of my favorite parts of the book is a scene between Jade and her father. It was beautifully written and had me tearing up. So, to sum it up—Animal Attraction totally met my expectations. Jill Shalvis has become one of my “go to” authors for contemporary romance. Her stories are fun, sexy, moving, and always put a smile on my face. Pick up Animal Attraction and put a smile on your face!