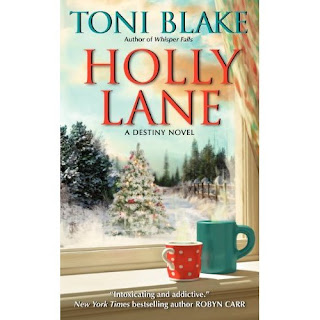 Sue Ann Simpkins had the perfect marriage...or so she thought.  She and Jeff had been sweethearts since high school and their happy marriage was the kind all of their friends aspired to, until Jeff blindsided her with the news that he was in love with someone else and wanted a divorce.  Now, six months later, Sue Ann is still reeling from the betrayal while trying to hold things together for her seven year old daughter, Sophie as they face their first Christmas without Jeff.  She needs a break from the stress and lets her friends talk her into renting a cottage at the lake for a quiet weekend alone.

Adam Becker has known Sue Ann for most of their lives.  He and Jeff have been best friends since school, he was best man at their wedding and is Sophie's godfather.  The divorced dad of twin boys is not looking forward to the holidays.  The fact that his sons are spending the month of December in Colorado with their grandparents has him feeling decidedly Scrooge-like and when he arrives at the cabin he's rented for the weekend he only wants to be alone.  The last thing he expects is to discover that his cabin has been mistakenly rented to Sue Ann and there are no other vacancies.  To make matters worse, a blizzard has closed the roads, forcing Adam and Sue Ann to share the cabin and suddenly, with no warning, his eyes - and other body parts - are viewing the woman who has always been his friend - only his friend - in a whole new light.

I love the friends to lovers trope, especially when that flare of sexual attraction comes with no warning, as it does with Sue Ann and Adam. A storm may be raging outside their cabin but inside, these two sizzle.  By morning, Sue Ann knows three things:  she's never felt so desired, never had sex that good and never been so scared.  She's clearly ready for some good lovin' but, as a woman whose trust was blown to smithereens by her ex-husband, a new relationship is a whole other story.   As these two gradually get to know one another on a new level, will they discover the magic of Christmas in each other's arms?  Or will Sue Ann's fears and a revealed secret from Adam's past derail their romance before it has a chance to begin?

With each visit I make to Toni Blake's Destiny, Ohio, I can count on a richly emotional story with likable characters, appealing humor and sizzling sensuality.  HOLLY LANE is no exception.  Sue Ann and Adam are both good people who have been given a second chance at love at the most magical time of year.  Each has an individual journey to make as, together, they grow as a couple.  I especially like how Blake moves Adam along his pathway through the use of dreams past, present and future ala Dickens' A Christmas Carol.  A very sweet and endearing part of this story is the relationship between Adam and Sophie, Sue Ann's daughter, and a Christmas morning promise that had me in tears.  If I hadn't already been in love with him, that scene would have sealed the deal.

As a fan of series, one of my favorite parts of reading a third or fourth book is catching up with previously introduced characters.  In HOLLY LANE, Blake has included a heartwarming secondary story featuring Mick and Jenny, hero and heroine from ONE RECKLESS SUMMER, the first book in this series.  Other characters are featured as well although Blake does a good job of keeping the focus on the main couple throughout.

Pick up a copy of HOLLY LANE and kick off the holiday season with another sexy, heartwarming story from Toni Blake.