In medieval Scotland, most marriages are made to acquire land or strengthen alliances. Rarely, are they a matter of love. Highland warrior, Alaric McCabe, a man of honor and fierce loyalty, knows he must marry Rionna McDonald to secure the alliance with her father's clan that will help the McCabes defeat their enemy and live in safety and peace. The fact that he barely knows Rionna and feels no attraction to her, nor she to him has no bearing on the matter. They both know their duty. But, on the way to formalize the betrothal, Alaric is attacked near the border of the McDonald lands and left for dead, only to be rescued by a woman who will test his patience, his heart, his loyalty and the honor that defines him.


Betrayed by her family, Keeley McDonald has been on her own since she was a young girl. Cast out by the McDonald chieftain and his wife, the healer lives quietly, supporting herself by tending members of the same clan that refuses to claim her. Stumbling upon a beautiful (her word), unconscious warrior in the forest near her home, she cannot turn her back on him, dragging him into her home and using her healing skills to save his life. When Alaric's older brother, Ewan (clan laird and hero of In Bed With a Highlander) finds them, he decides to bring Keeley back to the McCabe keep along with his brother and keep her there to help his wife, Mairin safely deliver their child. (The rugged warrior is a wee bit protective of his pregnant bride.)

The fiercely independent young woman isn't happy about being taken from her home (it's all she has) but, over the winter months, as she continues to nurse Alaric back to health, she slowly finds a place for herself within the McCabe clan as well as a place in Alaric's heart. Love, deep and true, blossoms between them but a heartbreaking decision looms ahead and when word comes of the impending arrival of the McDonald chieftain and his daughter, Alaric and Keeley are both forced to make the impossible choice between their love for one another and their love for, and loyalty to, the McCabe clan.

Banks has written another fast-paced, emotional and deeply sensual story that kept me up reading way beyond my normal bedtime. I fell in love with the members of the McCabe clan while reading In Bed With a Highlander and this book only reinforced those feelings. Catching up with them during the course of reading Seduction of a Highland Lass was like a long overdue visit with cherished family and friends. Keeley and Alaric broke my heart and, yes, tears were shed before I finally reached the end of the story but the journey was well worth the tears and I'd happily do it all over again. In fact, I probably will but right now my sights are set on the third and final book of the trilogy, Never Love a Highlander. It will be released next Tuesday, October 25th and I'm happily anticipating being back in the Highlands of Maya Banks' imagination before that day has ended!

Andreas Merrick and his brother, Roman, own and run a popular and extremely profitable gaming hell in London’s underworld. That’s not to say that they don’t have their problems. Andreas is hell-bent on revenge against someone from his past (for good reason), so he fends off assassination attempts on a regular basis. When Phoebe Pace boldly walks into his office asking for help and doesn’t leave when he tells her to, Andreas is slightly taken aback.

... “I say, you are most abusive with that word, Mr. Merrick. Poor Bertrand. Do most people hop to do your bidding?”

“Well, that is not good. It builds character to be told no.”

“You must have a lot of character then.”

“That is kind of you.” Warm smile.

“Well, then at least I can say you are an honest man.”

He stared at her. She smiled back.

Phoebe needs Andreas’s help. Her father owns Pace & Co., the finest carriage makers in London, but lately, her father’s health has been declining. Because of that, he has been duped into making bad investments that have racked up enough debt to lose control of the company. Combined with her brother’s mysterious disappearance, Phoebe is desperate and knows that Andreas Merrick has the means and the power to aid her. But what starts off as a cry for help turns into something neither can resist.

In Total Surrender is another winner from Anne Mallory. Her stories are paced perfectly, full of secrets, and just when you think things are coming together, Ms. Mallory throws in a line that makes you say, What?! –in a good way. Andreas and Phoebe have opposing personalities—he is dangerous and gruff while she is upbeat and happy—yet both are intelligent and fiercely loyal. I love that Andreas is constantly unsettled by Phoebe’s smiles and teasing, but doesn’t become mushy. As Phoebe describes him, Andreas Merrick is an intense man, but ruthlessly fair. I enjoyed seeing Roman (from One Night is Never Enough) again and the scene between he and Andreas upon Roman’s return from his honeymoon is priceless. This book had a lot of great lines, but my favorite is from Andreas’s POV while kissing Phoebe: Could it be called a kiss, this meeting of skin where one person pulled the soul from another? Beautiful. As is this rest of this incredible story. I highly recommend it! 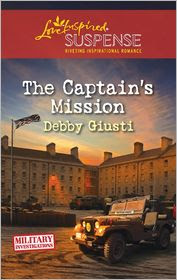 
Criminal Investigations Division agent Kelly McQueen is called to investigate the death of a solider during a live ammunition training exercise on the local Army base. The officer over the training exercise, Captain Phil Thibodeaux, is certain there must have been a lapse in the safety check during the exercise. But Agent McQueen has a gut feeling that something went wrong, terribly wrong, and she is pretty sure it wasn’t an accident.

Upon meeting Agent McQueen, Captain Thibodeaux wonders if she is the right person for the job. While her no-nonsense approach and business-only manners may work in some investigations, this particular one involves the loss of one of Captain Thibodeaux’s own men. So it not just business, it’s personal. Captain Thibodeaux has had enough of business-minded women, beginning with his career-driven mother who didn’t care for the little boy she left at home during those long days as the office.

Agent McQueen has spent her career in the military dealing with soldiers and officers full of male attitude. Add to that feelings of abandonment and bitterness towards her nearly non-existent, deadbeat father and you can see why Kelly is all about her work. She knows she can only count on herself.

As the puzzle pieces of the investigation begin to fall in place, the close working relationship between Captain Thibodeaux and Agent McQueen grows more personal and feelings slowly arise to the surface. Both are unsure how to acknowledge the bud of love blooming, but when danger encircles Agent McQueen and evil suspects come to light, they both realize they need to lean on each other and on God.

This is a wonderful romantic suspense! And though there is intrigue and evil throughout the story, it is also filled with sweet moments between the hero and heroine. While Ms. Giusti keeps you guessing the identity of the murderer, she generously sprinkles the novel with touches of faith that adds richness to the story.


What are you reading these days? Any recommendations?