Brunch and Tea with the Royalty of Romance

Earlier this month, one of our regulars, fsbuchler, had the opportunity to spend an afternoon with five terrific authors and has graciously agreed to share her experience with all of us.  Thank you, Flora!

BRUNCH AND TEA WITH THE ROYALTY OF ROMANCE
by fsbuchler

Last month I stumbled upon an announcement on Eloisa James’ Facebook Fan Page.
An Affair to Remember: An Afternoon of Romance
“Meet Eloisa and Friends!”
Tea and conversation with bestselling romance authors.
Sunday, January 8, 2012
1:00--4:00 PM
University Book Store
Bellevue, Washington
Meeting Eloisa James would have been enough for me.  Meeting her and her friends took the event into a whole new dimension because Eloisa’s “friends” turned out to be:
Connie Brockway, Christina Dodd, Lisa Kleypas and Julia Quinn 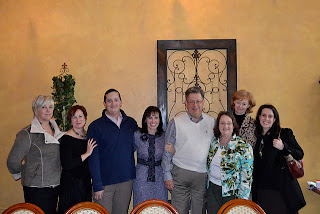 The Royalty of Romance! The Fabulous Five together in one place for three hours!! The magic ticket cost five dollars which would be applied to the purchase of any book and then you could have it autographed as well; could it get any better?This was an event not to be missed!
Only one tiny problem, I live in Southern California .
Did I mention that I have a Darling of a husband?  His name is George and we’ve been married almost 34 years. I think he still loves me a little because He Made It Happen!  Plane tickets, hotel accommodations, restaurant reservations; he even convinced our only child, William, age 24, to come along. I normally celebrate my birthday in March; this year we had my party a little earlier and in Bellevue, Washington !


We had met Eloisa, Connie, and PJ previously at the RWA 2011 Conference in New York last summer; another thoughtful gift from my husband. All of them kindly accepted invitations to join us for breakfast while we were in town. I didn’t think that this kind of luck could strike twice, but I gave it a try anyway.  I emailed Eloisa and Connie to see if we could meet with them again and even asked them to include their “Friends” in our invitation for brunch on the morning of the event.  I was speechless when I found out that they had ALL accepted the invitation!  It’s going to be very difficult to have a birthday as good as this one next year. 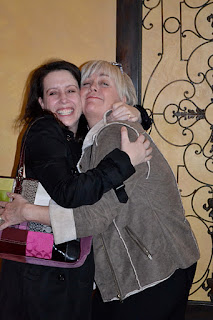 We met at a small bistro just around the corner from The University Book Store to make it convenient for everyone.  There were hugs and introductions all around with Connie and Eloisa making sure everyone knew everybody. Christina Dodd’s lovely daughter, Arwen, was able to join us for the day; she and William are responsible for taking most of the pictures in this blog.  Also attending was Franzeca Drouin who is one of Eloisa’s wonderful assistants.

From 10:30 AM to 12:30PM the time flew by in a laughter filled opportunity to get to know each other. Since there were ten of us, Eloisa started an informal game of “Musical Authors” with everyone changing seats from time to time so that we all had a chance to speak with one another.  It was a brilliant idea!
The Author’s Tea began at 1:00 PM; the manager of the University Book Store, Becky, (and Amy) had the room beautifully prepared for the event with a circular seating area so that every one there could have a good view.  They also had traditional English Tea and goodies like finger sandwiches, scones with clotted cream and jam, chocolate truffles arranged beautifully around the circle. Yum!
Eloisa and Julia Quinn were the first to arrive at the sold out event. The seating area was packed.  However, there was no sight of Connie, Christina or Lisa for the first twenty minutes.  They had gone to the wrong University Book Store!  Eloisa and Julia just took charge and started speaking and taking questions until the others arrived to cheers and laughter from the audience. 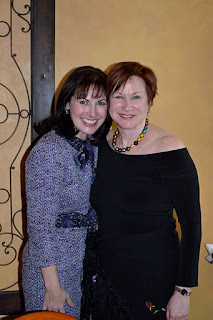 The latecomers didn’t miss a beat in joining the discussion.  They all took turns speaking about their writing careers, favorite books and characters, how and why they came to write Romance, what their husbands think of them writing and many other fascinating topics.  One thing they all agreed on was their children’s and husband’s concerns about being cast as characters in their novels. The Husband Concerns were generally about the love scenes in those books.  Eloisa said that her spouse was especially concerned with the fact that in her first book “Potent Pleasures” the Hero is named Alexander (her husband’s name is Alessandro) and he, the hero, is assumed to be impotent!  If you have read the book you know that Alexander is not impotent and Eloisa assured us that neither is Alessandro!
Each author spoke a little about their current or upcoming releases.  Christina Dodd talked about her and her husband’s mutual interest and love of fine wines, which was the inspiration for her current “Bella Terra” series.  The first two books in the series are already out and the third, “Betrayal,” will be released in April.
Connie Brockway discussed her decision to write eBooks and the evolution from there to her association with Amazon’s Montlake Romance. She is their Launch Author with the eBook “The Other Guy’s Bride," which is now also available in print.  I had the pleasure of meeting two of her Montlake representatives, Jessica and Kelli.   They are taking very good care of her and she deserves it!
Julia Quinn and I found a connection through her uncle who lives close to my home in California. Small World isn’t it?  She brought beautiful Cover flats from her newest book, “A Night Like This.”  It’s the second book in the Smythe-Smith series and will be released on May 29th. 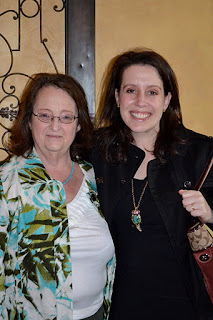 Lisa Kleypas is an unbelievably beautiful woman, inside and out!  She was incredibly sweet to us.  I am a member of her “Lisa’s Divas” group and when she heard that, she had to have a picture of us posed back to back like the Beauty Queen she is!  Lisa has a new book, “ Rainshadow Road ” coming out on February 28th.  (Read PJ's review here)  It is the first book of a new contemporary trilogy. However she also reassured the audience that she will continue to write Historical Romance!
Eloisa James is one of the most amazing women I know.  I have no idea how she teaches Shakespeare and English Literature full time at Fordham University , is a wife and mother of two and a remarkable writer all in one!  Just last month she released the novella “Winning the Wallflower” and the latest in her take on classic fairy tales, “The Duke is Mine.” She has also just finished the next book in the series, “The Ugly Duchess,” and her memoir “ Paris in Love” is due for early release on April 3rd.  April in Paris ; what could be lovelier!
Eloisa, Connie, Christina, Julia, Lisa, and my family, there are not enough words to express my thanks for this wonderful day!


Thanks, Flora for taking us along on your wonderful afternoon.  Readers, if you had the opportunity to spend an afternoon with five authors, who would you choose and why?  Flora is giving away a signed copy of Christmas Eve at Friday Harbor by Lisa Kleypas to one randomly chosen person who leaves a comment on today's blog!