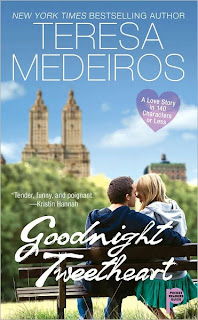 I first reviewed Goodnight Tweetheart by Teresa Medeiros back on December 17, 2010 after it was first released in trade paperback (December 14, 2010). Here is my original review posted below.


Four years ago, Abigail Donovan was on top of the world. Her debut book hit multiple best seller lists and was even picked by the queen of book clubs, Oprah Winfrey. Because of her success, Abby was able to afford living in a small but stylish apartment nestled in the heart of . Now, years later, she can’t find her muse for all the tea in . And because she can’t seem to get past the dreaded Chapter Five, Abby is left considering that perhaps she is nothing more than a one-hit wonder. She is a little reluctant when her publisher signs her up with a Twitter account in order to keep her devoted readers from forgetting about her, but decides to give it a go. When she starts, she “meets” someone named Mark Baynard, who is kind enough to show her the ropes. She learns that he teaches English lit at Ole Miss and has taken time off to travel. They flirt and message each other a few times, which becomes more often until they’re chatting on a regular basis. They begin to live vicariously through each other’s tweets and Abby eventually falls for Mark. When she finds out that he isn’t exactly who she thought he was, will his secret ruin any hope of a future together?


I loved this story! It was tender and sweet and really quite addictive. It was a quick read that I couldn’t put down. And the fact that I’m not on Twitter didn’t diminish my enjoyment one bit. I felt all the ups and downs Abby experienced both in her personal and professional life and was impressed with how much emotion was expressed in a book consisting mostly of tweets. I’m so glad I didn’t read any reviews about this book before reading it as I was thrown for a loop with the twist, right along with Abby. From the beginning, I was laughing at the quips and quick wit, but leave it to Teresa Medeiros to make me cry, too! Kudos to her for a job well done! Do yourself a favor and put this wonderful book on your Christmas list. You’ll be so glad you did!

As you can tell, I loved this book! I thought it was extremely creative and spoke volumes of Teresa Medeiros’s talent that she could tell and show readers a love story based almost entirely on tweets. In my original review, I gave the book 4.5 stars. Why? Well, at the end of the story, I wanted...just a little something more. I won’t say more than that because I don’t want to spoil it for those that haven’t read it yet. Those that have read the story know what I mean. So, why am I giving it 5 stars now? Because Ms. Medeiros has added an epilogue to the mass market version and it gave me the exact ending I was longing for! I thought it was an utterly perfect happily ever after for Abby and Mark. As before, this is one book that I highly recommend!


So, dear readers, are you on Twitter? If so, do you have any funny stories to share?  Because I love it so much, I am going to give away my copy of the new mass market release of Goodnight Tweetheart to one lucky commenter! In addition to the new epilogue, this version also includes snippets from Teresa Medeiros’s last two historicals and a sneak peek of her upcoming historical! (Contest is limited to residents living within the or .)