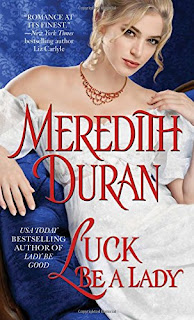 Catherine Everleigh and Nick O’Shea were introduced in Meredith Duran’s Lady Be Good. In Luck Be a Lady, they are the lead characters. The most important thing in Catherine’s life is her family’s auction house. Her most cherished childhood memories involve her father’s teaching her the skills employed in maintaining the reputation of Everleigh’s and his pride in her ability to evaluate accurately the items acquired for auction. As an adult, her devotion to Everleigh’s is all-consuming.

But for her, Everleigh’s was everything. Their father’s legacy. Her sacred birthright. Everleigh’s made her who she was – which was not merely a spinster, the “Ice Queen” that rude wits had dubbed her. She was a person of business. An expert in the field of fine arts. A learned professional, regardless of her sex.

Her brother Peter lacks Catherine’s knowledge and integrity; he sees the auction house only as a means to his goal of gaining political power. Catherine knows he is embezzling funds from Everleigh’s to finance his political ambitions. He even threatens to sell the business, but there is little she can do to stop him. She is also wary of his scheme to arrange a marriage for her that will benefit him. Desperate to prevent Peter’s destroying the business she loves, she approaches Nick O’Shea for help. During their conversation, she proposes a marriage of convenience.

Nick O’Shea knows what it is to have nothing, to be nothing in the eyes of those with money and power. He learned at an early age the connection between money and power, and he set his sights on acquiring both. He wasn’t overly particular about how he achieved his goal, but he is powerful enough now to be more businessman than crime lord. He can be ruthless or benevolent as the situation demands, and he is clever enough to know that his power must extend beyond Whitechapel if he is to protect his interests there. As he tells Catherine, “It helps to hold the markers of the men who make the laws.”

The marriage offers mutual benefits, but these benefits are not the usual gains of money or status. Catherine knows that news of her marriage to the notorious Nick O’Shea will damage her brother’s political career, and she offers him her pledge to keep the marriage secret in exchange for control of Everleigh’s and his vote on the Municipal Board of Works. The latter will give Nick the votes he needs to protect his buildings. Initially Catherine’s focus is solidly on protecting the auction house, but Nick has been fascinated by Catherine since his niece secured a position as an Everleigh Girl. Marriage deepens his fascination, and as Catherine discovers Nick is far more than the uneducated ruffian she thought him to be, she struggles to maintain her Ice Queen detachment. But however strong the attraction grows, can it ever be enough to bridge the gulf of social class and experience that separates them?

Once again Meredith Duran gives readers romance with a difference. Cross-class romances are standard fare in romance fiction, but most involve a hero marrying below his class. Romances in which the heroine marries down are less common. Even rarer are such romances in which the higher class protagonist is not an aristocrat. Catherine is not a debutante reared to find a husband with the highest title. Her father started training her to appreciate and evaluate the items that came into the auction house and to see Everleigh’s partnership with artists as service to art before she was seven. Fully aware of her intelligence and committed to her role as a businesswoman, Catherine prefers to remain unmarried.

Despite the fact that by birth and experience Catherine and Nick inhabit different worlds, they are alike in their fierce preservation of the facades they have erected. The facades may be different—hers cold and smoothly polished and his raw power and rough edges—but the images serve to protect their vulnerabilities and preserve them from intimacy. Nick is less isolated and more self-aware than Catherine, and he wants to make Catherine aware of the passionate woman he sees in her. The barriers between them crumble gradually and convincingly. They are both intelligent, complex characters, and watching them fall in love is wonderful, rewarding reading.

In addition to the layered characterization and a compelling central relationship, Luck Be a Lady also includes some delightfully comic scenes. Exchanges between Nick and Catherine prove Duran can do banter with the best in the genre, and the twenty-four-page marriage contract is worth several giggles on its own. But the highlights are the wedding and consummation scenes. The wedding is unique, and the consummation scene manages to combine humor and sizzle. I also found the ending completely satisfying, an increasingly rare experience even with books I like. In other words, this one is a full bells-and-whistles, five-neon-stars recommendation. It’s on my Best of 2015 list.

Luck Be a Lady can be read as a standalone, but I highly recommend that you read it with Lady Be Good. The two books were released on consecutive months for good reason. If you love historical romance, you owe it to yourself to read Meredith Duran. She is among the very best. This pair of books is a great place to start, and then you can move to her backlist.


Have you discovered Meredith Duran's books yet?

Do you enjoy cross-class romances?

One person who leaves a comment on today's post will receive the following three autographed books by Meredith Duran: Fool Me Twice, Lady Be Good, and Luck Be A Lady. (U.S./Canada only) 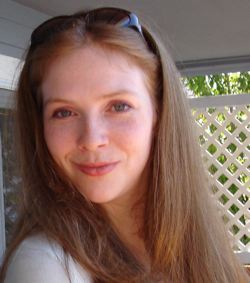 ABOUT THE AUTHOR: MEREDITH DURAN is the author of eight previous novels, including The Duke of Shadows (winner of the Gather.com First Chapters Romance Writing Competition); Wicked Becomes You (included on the Woman’s World List of Best Beach Reads for Summer 2010), and the USA TODAY bestseller Fool Me Twice. She blames Anne Boleyn for sparking her lifelong obsession with British history, and for convincing her that princely love is no prize if it doesn’t come with a happily-ever-after. She enjoys collecting old etiquette manuals, guidebooks to nineteenth-century London, and travelogues by intrepid Victorian women. Visit her at MeredithDuran.com, or catch up with her on Twitter: @meredithduran and Facebook: AuthorMeredithDuran.