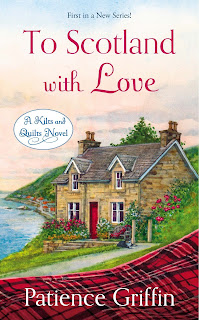 I love birthdays! For those of you who are Dish regulars, this will not come as a surprise. In fact, I love them so much that I decided to extend this year's celebration beyond the actual day (yesterday) to the whole week. Every day a different author will join the celebration with a special post and every day I'll have giveaways!

Today's birthday guest is one of my favorite new authors, Patience Griffin. Patience's debut contemporary romance, To Scotland With Love was a double RITA finalist this year and one of my favorite books of 2014. She now has three published books in her Scotland-set Kilts and Quilts series and is currently in Scotland (le sigh) working on more. Here for your enjoyment is a new, original, scene starring Graham and Cait Buchanan, the hero and heroine from To Scotland With Love along with a favorite secondary character, Cait's grandmother, Deydie and a couple "new" faces. Thank you, Patience. I love it!
~PJ


PJ gasped as the taxi made its way down the bluff and she caught sight of her home for the next four days. It was more beautiful than she imagined when she’d booked the Kilts and Quilt retreat online—a special birthday present she’d given herself.

Down below was Gandiegow, the perfect Scottish village wedged between the vast North Sea and the bluff they were descending. Gandiegow only had sixty-three cottages and was known for three things: commercial fishing, being the hometown of Graham Buchanan, the famous BBC actor, and of course, the Kilts and Quilts retreat for quilters.

As the taxi pulled into the parking lot, PJ’s stomach did the Highland jig. Yes, she was two hours late. Yes, she should’ve built more time into her schedule to get here. But she had made it. She paid the driver, scooted out of the car, and pulled on her Michael Kors backpack, ready for her adventure. Three minutes later, she was rolling her bag into town with a map of the village in her hand and couldn’t stop smiling. She wondered how she would be received.

Quilting Central was easy to find among the scant row of businesses with its Nine-Patch sign hanging out front. As PJ opened the door, a bell above her jingled. At the same time, her nose was tantalized with the most wonderful smell of beef—stew perhaps. The room came alive, all the women jumping up at once, and rushing toward her. She glanced around, wondering if someone important had entered the room, like Graham. But he wasn’t behind her so she braced herself.

An old portly woman barely five feet tall reached her first and grabbed her arm. “Happy birthday, lass! I’m Deydie. We were wondering if ye were ever going to get here.” She motioned to the others. “I let them go ahead and eat, but I saved ye some of my special birthday stew.”

PJ was confused. “How did ye know it was my birthday? I didn’t tell anyone.”

“What friend?” PJ scanned the room, but didn’t see anyone she knew.

Deydie looked around. “Where did she go? The one with the funny name.” As if Deydie wasn’t a bit strange for a name as well.

The door to the restroom opened and out walked Janga. Janga?

“What are you doing here?” PJ exclaimed.

Janga rushed forward and gave her a quick hug. “I wanted to surprise you.”

“Yes, but me being here is only half of the surprise.”

Janga looked like a near relative of the Cheshire Cat. “Cait, come here. I want you to meet PJ.”
A thirty-something woman with a nice smile joined them. “Hi. It’s lovely to meet ye.” Her accent wasn’t completely Scottish, but she definitely had mischief in her eyes, too. She winked at Janga.

“But I want to know what’s going on.”

“Don’t worry yere pretty arse about it. The bowls and spoons are there as they should be. We’ve been waiting to cut the cake until after ye ate. Now, get to it.”

PJ did as she was told, filling a bowl, and then walking it over to where Janga sat with Cait, the two of them whispering.

“Come on,” PJ half-whined. “It is me.  And you know I don’t do well with surprises. Especially when I know one is coming and I have to wait.”

The bell over the door jingled. All eyes moved in that direction, including PJ’s. When tall, dark, and gorgeous Graham Buchanan strolled through with a rose in his hand, she barely restrained herself from rushing him the way the quilting ladies nearly tackled her. Graham seemed to be looking for someone, and when his gaze fell on Cait, it dawned on PJ who Cait was.

“You’re Cait Buchanan!” PJ gaped at the luckiest woman in the world, married to the most swoon-worthy man on the planet.

“Aye.” Cait smiled, her eyes still on her husband. Weirdly, she tilted her head to the side in PJ’s direction.

As Graham made his way over, PJ was worried she might stop breathing. Although, it might not be awful if she passed out, maybe Graham would give her mouth-to-mouth resuscitation. It took her a moment to realize he was smiling at her now!

He walked to her, holding out the rose. “For you,” he said in his wonderful Scottish burr that PJ knew and loved from his movies that she’d watched at least twice.

PJ latched onto Janga’s arm so she wouldn’t fall out of her chair. Was it wrong to lust after a man when his wife was sitting not one foot away on the other side of her? Nah. Hers was only a movie star crush. She could tell, the way his eyes kept flitting to his wife’s that what they had was the real deal.

PJ took the rose. “Thank you.” Her voice sounded like it had been filtered through sandpaper.

Graham leaned down and planted a kiss on her cheek. “Happy birthday, PJ. Enjoy yere stay in Gandiegow. The best place in the world.”

PJ couldn’t move. She could only soak up the moment. Graham Buchanan kissed me! Like the kiss had been a cue, the quilting ladies started singing the traditional song while Bethia carried a candle-lit cake in her direction.

PJ turned to Janga and squeezed her hand. “I don’t know how you pulled this off, but this is the best birthday ever!”

(Open to all - Winner's choice) 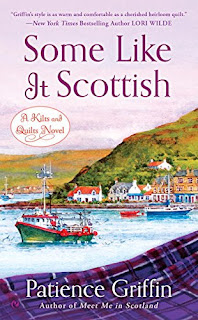 In the delightful new Kilts and Quilts novel by the author of To Scotland with Love andMeet Me in Scotland, the Real Men of Scotland are waiting. And it’s a match made in Gandiegow… Kit Woodhouse’s matchmaking business is such a success, she’s expanding to the Highlands of Scotland where the hot, prosperous, and kilted are anxious to connect. Now, looking to fill her stable with eligible bachelors, Kit’s arrived in Gandiegow to recruit potential Real Men of Scotland. It’s not until she meets her tour guide that she discovers just how real they can be.With his sexy grin, jeans, and black wellies, Ramsay Armstrong is an unpolished hulk of a Scottish fisherman—and a skeptic when it comes to romance. Not exactly a man of “pairing attributes” when talking marriageable matches, but he does make Kit’s heart beat a little faster. Maybe it’s the scent of the sea in his hair. Maybe it’s the challenge. Maybe it’s the thrill of the unexpected. Then again, maybe it’s love.