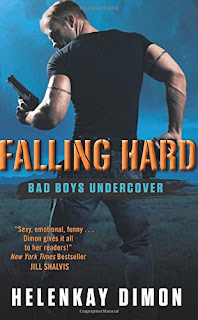 Falling Hard is the second installment in HelenKay Dimon’s Bad Boys Undercover series. Her heroes work for a group called the Alliance, which draws its personnel from the CIA and Britain’s MI6. I came to this book without having read the prior ones and found that I had no trouble following the storyline.  Relationships established in prior books were explained briefly but effectively. So was the nature of the organization.

The heroine, Lexi Palmer, is an EMT working at her father’s medical clinic in Pakistan.  After seeing soldiers moving heavy-duty weapons into the mountains, she reports the incident through the secret channels given to her father.  She doesn’t expect Weston Brown, a self-described “badass, shoot anything” kind of guy, and Josiah King of MI6 to come extract their informant. They don’t expect that informant to be Lexi.

Their arrival is opportune, however, because Pakistanis have invaded the clinic and are holding Lexi hostage when West and Josiah arrive.  Not that she’s ready to trust them right away.  While I was skeptical that she wouldn’t end up dead in that initial confrontation, I already liked the characters enough to buy into the scene.

The dialogue between West and Lexi is sharp and, on her side, flavored with a dash of snark.  She quickly establishes herself as able to stand up to these two alpha males. The story revolves around West and Josiah’s efforts to reach the Alliance and bring in reinforcements to handle the weapons question and to get Lexi to safety.  Their quest is complicated by an Alliance traitor and his unexpected ally.

The story twists and turns, producing surprising allies and unexpected perils.  Dimon skillfully uses both the jeopardy these situations create and the lulls in the action to build Lexi and West’s relationship.  Lexi has issues about her future, and being in Pakistan forcibly reminds West of a prior mission that still haunts him.

The Alliance characters display a camaraderie that, for me, is part of the pleasure of reading a series.  They always have each other’s backs.

The story overall was engaging and suspenseful, with a great balance of action and character and a lead couple I could root for.  I recommend the book.