Review - - When a Scot Ties the Knot 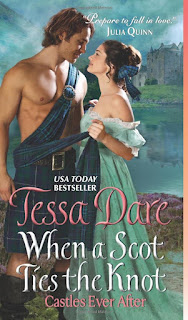 We all knew way back when the first Avon Fanlit contest happened, Tessa Dare was going to be a name we were going to know as well as we knew Eloisa James or Julia Quinn. While Tessa Dare stole my heart (and a place on my auto-buy list) with her Spindle Cove series, when she introduced her new series about damsels who inherit castles, the idea just titillated me. A castle. I mean, you know a castle must come with a library, and bitches love libraries. It was the sort of escapist idea I immediately embraced, identified with all the characters, and fell in love with just how brilliantly Tessa Dare makes me forget time, obligations, and housekeeping.

WHEN A SCOT TIES THE KNOT is the third in this delectable series; and as is my way, I preordered and received my book the day of release. I took it with me to lunch, curling up on the chair and laughing like a hyena on the first page. Two grad students checked to make sure I was okay; I snorted at them and waved them away, never lifting my eyes from the book. The next day, at lunch, I continued snickering and if asked, telling people about this book. The Thursday after the release, I got a massage and told my masseuse about the book—and when she said it sounded good—I gave her my copy because by then I had received a free review copy and could finish it when I got home. I hope she loves it as much as I did. I hope you do too!

Maddie, our intrepid heroine, is a panic-attack-ridden SHY artist; and on her 16th year, when she is “threatened” by the prospect of a glorious London season, she does the unthinkable: she invents a fiancé. A mysterious soldier who is off fighting for home and hearth—and she couldn’t imagine finding anyone else and thus participating in a London season. It worked—Maddie was as amazed as the rest of us—and then she had to keep up the pretense for five years, when she decided she needed him to be “killed off” so she could get the family to stop bugging her about when he was coming home. (Details. Tsk.) While she is keeping up the pretense, she had to write letters—for five years—to the fictitious Captain Logan MacKenzie, the love of her life.

Maddie inherits a castle and is saved from coming out of mourning and having to find a husband. In fact, at her castle, she’s quite content with her life. She lives with her beloved Aunt Thea and works on her illustrations. Her greatest ambition in life is to do illustrations of nature for an encyclopedia. Currently, she is keeping two lobsters, waiting for them to mate, so she can draw the illustrations for the Big Event.

Let that sink in. Our heroine wants to draw her pet lobsters copulating.

But this perfectly ordinary (if eccentric) world is disrupted when her fictitious fiancé returns from the dead, taking up all the room in the parlor with his six foot plus, two hundred plus, brawny, hairy, Scottish self. She is even more flummoxed when he demands she make good on their promise to be married. If she refuses, he’ll have all her sent letters published, humiliating her and her family with her web of lies.

She decides to marry him, in name only, at least long enough to find said letters and burn them; but meanwhile, she has to contend with his ragtag group of soldiers who become more endearing than a batch of mutt puppies, an inexplicable attraction to a man she never imagined existed and who is irking her every minute of the day to protect his own, and make sure no one figures out about her web of lies, which of course, she’s covering with another web of lies.

There were scenes in this book that made me go, “Really? Why is this scene here?” (because you do that as a writer) and then voila, it all made sense. It was really quite a miracle. Yes, this book has the sort of silliness Dare is known for doing; and it also has the emotional and intense vulnerability for which Dare is also known. And who knew a lobster could be such a perfect metaphor and foil for our shy heroine? It was just brilliant.