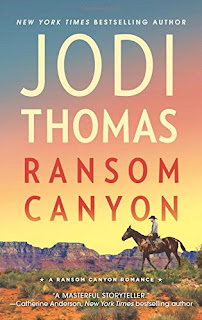 Jodi Thomas introduces a new series with Ransom Canyon, a Texas-set contemporary western that spotlights Thomas’s deft touch with multiple storylines about the extraordinary lives of ordinary, flawed characters of various ages who struggle with problems in which the reader believes.

Staten Kirkland, a direct descendant of James Kirkland who founded the Kirkland Double K ranch more than a century earlier, is a man who loves his land and takes pride in following in the footsteps of his grandfather and the generations before him. When his sixteen-year-old son was killed in a single-vehicle accident two years after Staten’s wife lost her battle with cancer, the rancher clung to his sanity by a thread. It was the land and his wife’s best friend, Quinn O’Grady that saved him. Five years have passed since his son’s death, but Staten still lives life distanced from his emotions, managing the Double K and visiting Quinn when the storms come.

Quinn is a shy, silent woman who works her small lavender farm and confides in no one. She has known Staten since they were in grade school and has loved him almost as long. She is content to be his sanctuary when the wildness and the need for human contact overwhelm him, but after five years, each time they lie together, she wonders if it will be the last time. It is that uncertainty that prompts her to make a demand for the first time: “From now on . . . when you come to see me, I need you to kiss me goodbye before you go. If I’m asleep, wake me. You don’t have to say a word, but you have to kiss me.” Kissing Quinn is no hardship and Staten complies. Neither of them could have guessed in that moment that so simple a thing as a kiss could start a chain of changes that would alter their lives in dramatic ways.

Lucas Reyes is a part-time ranch hand for the Double K. Just seventeen, he grew up helping his father who works on the Bar W, the ranch that borders the Double K, but as soon as Lucas turned sixteen, he signed up to work when the Double K needed extra cowboys. Kirkland pays a higher wage, and Lucas is saving for college. He plans to finish high school early and have his baccalaureate degree by the time he turns twenty-two. But Lauren Briggman has him thinking about more than work and his collegiate future.

Fifteen and at the top of her sophomore class, Lauren Briggman is more interested in books than in boys, which is a good thing since her father, sheriff of tiny Crossroads, Texas, intimidates the young men who show any indication of interest in her. But Lucas Reyes is not like the other boys she knows. He is more serious, more thoughtful, and more ambitious. When he proves to be the stuff heroes are made of, Lauren knows she wants to be friends with him. When he gives Lauren her first kiss, she realizes how special this friendship is.

Yancey Grey is an ex-con who wandered into Crossroads looking for a stake that would put him on the road to normalcy, something Yancey has never known. But what was supposed to be a brief stop turns into a new life when a group of retired teachers give Yancey a job, a place to live, and people who care about him. Just when Yancey begins to believe a new life can be his, his past smacks him with the old reality. Can Yancey summon the courage to risk everything for his new community?

I’m a huge fan of Jodi Thomas’s Harmony series, and Ransom Canyon strikes familiar notes without being merely the new verse of an old song. Staten and Quinn are wounded souls drawn together initially by shared grief and the need for comfort. Without their being fully aware of it, their relationship shifts and moves in new directions. They are both interesting, sympathetic characters, and the developing relationship captures the reader quickly. I was especially pleased that they are both in their forties, old enough to have survived some devastating blows and young enough to build a new life.

Lucas and Lauren are good kids, hard-working, responsible, and family-loving—the kind who get too little attention in life and in fiction. Lucas, the eldest in a big family, listens to his father’s advice, cherishes his mother’s hugs, and feels no resentment that everything he wants is not handed to him. Lauren is weary of her father’s lectures and is bothered by the noisy clashes between her separated parents, but she is secure in her father’s love. She is even beginning to understand that her mother loves her too. In the early stages of young love, they are sweet and endearing.

Yancey is one of the misfits that Thomas excels at bringing to life. His story has tragic overtones, but the author presents it with considerable humor. There is nothing amusing about his throwaway past or his prison experience, but the mutual adoption that occurs between Yancey and the quirky senior brigade, his careful scrutiny of the townspeople as he studies how to act “normal,” and the budding romance between him and the warrior nurse made me smile.

If you have enjoyed the Harmony books, you will probably enjoy this book as well. If you like stories with colorful but credible characters engaged in several storylines, you should definitely add this one to your list. Thomas remains an auto-buy author for me. I am already eagerly awaiting the second book in the series, Rustler’s Moon, a January 26, 2016 release. Winter Camp, a prequel novella offering the story of Staten’s ancestor James Kirkland and the founding of the Double K, is also available.