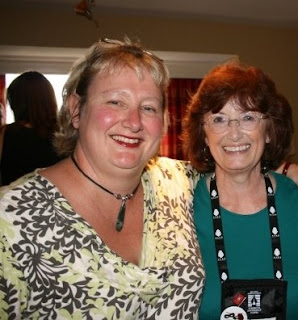 How could I have a Happy Birthday Bash without Anna Campbell? Well, the simple truth is, I can't! Even though I'd much rather be clinking glasses in person, the next best thing is welcoming my wonderful friend (the real wonder from down under!) to today's birthday bash here at TRD!

Always a voracious reader, Anna Campbell decided when she was a child that she wanted to be a writer. Once she discovered the wonderful world of romance novels, she knew exactly what she wanted to write. Anna has won numerous awards for her historical romances, including the RT Book Reviews Reviewers' Choice, the Booksellers' Best, the Golden Quill (three times), the Heart of Excellence, the Aspen Gold (twice), and the Australian Romance Readers Association's most popular historical romance (five times). Her books have twice been nominated for Romance Writers of America's prestigious RITA Award and three times for Romance Writers of Australia's Romantic Book of the Year.

When she's not writing passionate, intense stories featuring gorgeous Regency heroes and the women who are their destiny, Anna loves to travel, especially in the United Kingdom, and listen to all kinds of music. She lives near the sea on the east coast of Australia, where she's losing her battle with an overgrown subtropical garden. Connect with Anna online at: annacampbell.comhttps://twitter.com/AnnaCampbelloz Facebook.com/AnnaCampbellFans

Hi PJ! Thank you so much for asking me to share in your birthday celebrations. And happy birthday!!!  You’re one of my favorite people so I think they should declare PJ Day and make it a worldwide public holiday!  Anything less doesn’t do you justice.

And how very generous of you to make your birthday week a chance to give other people presents! Perhaps we should make PJ Day, PJ month!!!

My present for PJ and her Romance Dish gals is a sneak peek at my new novella A Pirate for Christmas which I’m currently writing and plan to release on 1st November. This will be the first time my dashing buccaneer Rory (who isn’t really a pirate, but a heroic captain of the Royal Navy) will appear in public. The new Lord Channing is very much looking forward to dancing a jig with PJ at her birthday party.

And my, don’t you just love a man in uniform?

Pursued by the pirate…
Bess Farrar might be an innocent village miss from an isolated corner of wildest Northumberland, but she knows enough about the world to doubt Lord Channing’s motives when he kisses her the very day they meet. After all, local gossip insists that before this dashing rake became an earl, he sailed the Seven Seas as a ruthless pirate.


Bewitched by the vicar’s daughter…
Until he unexpectedly inherits a title, unswervingly honorable Scotsman Rory Beaton has devoted his adventurous life to the Royal Navy. But all bets are off after he meets spirited Bess Farrar. Now this daring mariner will do whatever it takes to convince the lovely, headstrong lassie to launch herself into his arms and set sail into the sunset.

A Christmas marked by mayhem.
Wooing his headstrong lady, the new Earl of Channing finds himself embroiled with matchmaking villagers, an eccentric vicar, mistaken identities, a snowstorm, scandal, and a rascally donkey. Life at sea was never this exciting. The gallant captain’s first landlocked Christmas promises confusion, highjinks, danger, and passion – and a breathtaking chance to win the love of a lifetime.

And here’s the exclusive excerpt.

When vicar’s daughter, Bess Farrar beards the elusive new lord of the manor in his library at Preston Abbey to obtain permission to borrow Daisy the donkey for the annual nativity play, she has no idea what fate has in store:

That lush mouth, a promise of passion if Rory had ever seen one, set in a mutinous line, and she regarded him from across the room like a strange  and potentially dangerous new species. “You’re a very unusual man, Lord Channing.” 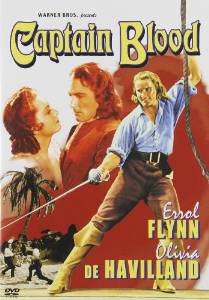 He smiled at this outspoken lassie with utter delight. “You have no idea, Miss Farrar.”

“Is it because you’re a pirate?”

For a moment there, he’d felt in control of the situation. The feeling had been fleeting. He stopped on his way to the library door and stared at her in astonishment. “What on earth did you say?”

She looked slightly shamefaced and made an apologetic gesture with one hand. “I’m sorry. Perhaps you don’t like people to mention your former occupation.”

“My former occupation,” he repeated very slowly. “As a pirate.”

“The story’s all over the village.”

“You must have expected people to talk about you. And given you’ve been such a recluse since your arrival a month ago, it’s inevitable that rumors are flying.”

She studied him and devil take her, understanding filled her lovely face. “Seeing you were free to take up the title, I imagine that you’ve reformed.”

“I wouldn’t be too sure about that.”

She eyed him uncertainly, but plowed on. He commended her determination. “There’s no need to feel embarrassed about your past crimes, my lord. Here at Preston Wyck, we tend to take people as we find them.”

He sighed and ran his hand through his hair. “You’re about to start nagging again. I feel it in my piratical bones.”

As you can probably tell, I’m having nearly as much fun writing this as I’d have at a birthday party for PJ! (and PJ is having a whole lot of fun reading it!)


Because A Pirate for Christmas is currently a lot of handwriting in a notebook, I can’t offer that particular story as today’s prize. Instead, I’ll pick two people from the commenters and they’ll win Kindle downloads of both my other 2015 novellas,Three Proposals and a Scandal and The Seduction of Lord Stone.

Giveaway is international including North America. So to make it clear, today’s prize is 2 x 2 novellas! Good luck!

So let’s talk pirates! Do you have a favorite pirate in film or fiction? I’ve got to admit a fondness for that rascally Aussie Errol Flynn who was extremely dashing swinging from the rigging in Captain Blood.

And PJ, wishing you smooth sailing for the coming year and a fabulous birthday to launch your voyage!

Thank you, Anna! Having you here to help me celebrate means a lot to me.

Readers, in addition to Anna's giveaway, I'm also giving away a package of books from my prize stash! (U.S. only)

Be sure to check out Anna's new novellas below. I loved both of them! 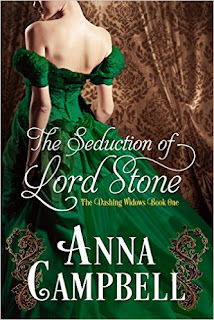 For this reckless widow, love is the most dangerous game of all. Caroline, Lady Beaumont, arrives in London seeking excitement after ten dreary years of marriage and an even drearier year of mourning. That means conquering society, dancing like there’s no tomorrow, and taking a lover to provide passion without promises. Promises, in this dashing widow’s dictionary, equal prison. So what is an adventurous lady to do when she loses her heart to a notorious rake who, for the first time in his life, wants forever? Devilish Silas Nash, Viscount Stone is in love at last—with a beautiful, headstrong widow bent on playing the field. Worse, she’s enlisted his help to set her up with his disreputable best friend. No red-blooded man takes such a challenge lying down, and Silas schemes to seduce his darling into his arms, warm, willing and besotted. But will his passionate plots come undone against a woman determined to act the mistress, but never the wife? 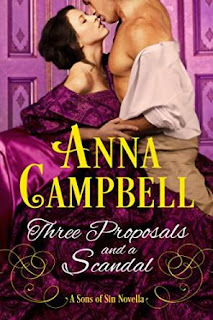 Whose hot kisses will melt the ice princess? All London is agog to know! Will beautiful Marianne Seaton choose rich Lord Desborough or handsome Lord Tranter – or dark, dangerous Elias Thorne? Get ready for proposals and passion, rivals and revelations, secrets and scandals at the season’s most glamorous house party. As the season reaches its brilliant climax, three very different men pursue beautiful Lady Marianne Seaton. She’s the marriage mart’s greatest prize – even if cruel and unjust gossip paints her as a woman cold and glittering as any diamond. Lord Desborough is her father’s choice - rich, powerful, safe. Lord Tranter is society’s darling - handsome, dashing, charming. Then there’s the dangerous, compelling man nobody in their right mind calls eligible. Elias Thorne, son of scandal, reputed deceiver, possessing a rakish fascination no woman can resist. A lady might choose Elias as a lover, but as a husband, he’s too risky a bet. Even if Marianne’s forbidden yearning for him threatens her future and her reputation. When Marianne’s suitors pursue her to the year’s most glamorous house party, there will be proposals and passion, rivals and revelations, secrets and scandals. Let battle commence – but will the best man win?