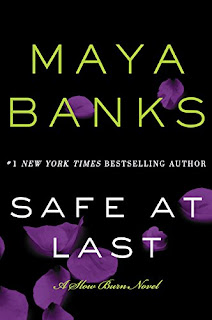 I once read a blog written by Maya Banks discussing book reviews.  Reviews, she said—and I’m paraphrasing—were for readers.  NOT for writers.  She stated she never reads any of her own book reviews, whether they be glowing or awful.  The awful explains itself because who among us wants to have our shortcomings waved in front of our faces?   But it was what she said about the glowing reviews that interested me; she said she won’t read them because they distract her as basking, tweeting, and Facebooking about said adulation can suck up quite a lot of time… time better spent writing an actual book.

SAFE AT LAST, the third book in Bank’s Slow Burn Series, was fun, fun, FUN!   Granted, I was on vacation at the beach with my family when I picked up the book.  And yes, I was already in a great mood…  but as soon I read the first couple pages, I wanted to read the book more than I wanted to look at my surroundings.   That’s how fun.

Zack Covington has spent his whole adult life agonizing over the disappearance of his high-school sweetheart, the only woman he’s ever loved, his “Gracie”—a special girl with unusual psychic gifts from the wrong side of town.  Zack loved her so much, he planned his whole life around building a future for the two of them, accepting a football scholarship in an out-of-state university only because it represented an opportunity to make something of himself… for her.   But when he comes home to visit her one weekend, he finds she has vanished without a trace.    It’s a cruel rejection, to his thinking, one without any real closure.

12 years later and football is a thing of the past.   Zach, a shell of what he used to be, is now working for Devereaux Security, a dangerous job that sometimes allows him to exorcise his demons.   It is on his next job assignment at a well-known art gallery when Zach sees it:  a painting that is the exact replica of a special place from his past, a secret place only he and Gracie would know.    She’s clearly alive!  And in HIS city, but when he finally sees her, she’s so terrified of him, she starts trembling and does everything she can to run away from him.   From him!   From the man whose life lost all it’s meaning once she left.   Something is very wrong.

What’s more, dangerous people are now targeting Zack and colleagues.   And when they find out Zack’s weakness, Gracie is targeted as well.    Zack must do everything he can to keep her safe, even if that means forcing her to be with him, a situation that sets her into such a panic, she keeps trying to get away from him.   He has to earn her trust--and fast!--if he’s to ever hope to keep her safe.

He has to earn her love—and fast!—if he’s to ever hope to make his life mean anything again.

I don’t know why I said “fun, fun, FUN,” about the book when it deals with such serious subjects but it was fun.    I got sucked in so completely because the pacing was stellar.  I think pacing may be Banks super-writer skill.  The story itself was well-crafted and I enjoyed the subtle inclusion of Gracie’s mind-reading skills, which played such a minor role in the thick of the novel, but still did not feel as though it were a last minute addition.

My only quibble, if I were to grasp at one, is that there were limits as to how much I felt for the characters, the heroine in particular.  And Banks doesn’t soften any blows. It is a well-known hypothesis that the more suffering a character endures, the more the reader feels for that character.  But even after discovering the horror Gracie’s survives, I still cared more for Zack.   But it really was his story, his journey, and his hero-making.   And oh, what a hero.

My strong recommendation is to buy SAFE AT LAST because it’s a safe bet you won’t be coming up for any air—no matter if that air smells of the ocean or home-cooking—until you’ve completely devoured the whole of it.

And I’m sort of glad Maya Banks won’t be reading this review because I’m eagerly awaiting her next book and she needs to stick to the writing of it.