I recently returned from four days in New York City with my best friend. Though we've been friends for almost 30 years, this is the first time we've taken a non-business-related trip together. I'm a hot-water shower hog. She assured me her snores would rattle the windows. She's an introvert. I talk to everyone. She could walk for miles. I have a bad knee. She hates having her picture taken. My camera rarely leaves my side. Would our friendship survive the trip? You betcha!


Deciding we wanted to be in the middle of the action for my friend's first trip to the Big Apple we booked a room at the DoubleTree Suites in Times Square. If you don't mind walking from your hotel into a sea of people it's a great location for it's proximity to ABC and NBC studios, Broadway theaters, Grand Central Station, Rockefeller Center, and Junior's. (more on Junior's later) 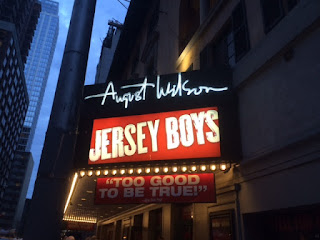 I've always enjoyed seeing places through the eyes of another generation but there's a lot to be said for traveling with someone your own age. Being teens in the 1960's, it wasn't difficult to agree on two of the plays we wanted to see: Jersey Boys and Beautiful.

Frankie Valli and The Four Seasons are part of the soundtrack of my teens and Jersey Boys is their story. I've been aching to see this show since 2007 and am happy to report that it was all I had hoped it would be...and more. We scored seats two rows from the stage for an amazing, up-close-and-personal view. Of course, I knew all the words to all the songs but I managed to restrain myself from singing out loud (mostly). Sitting still, however, was beyond my abilities. I don't think my feet or head stopped moving the entire time! 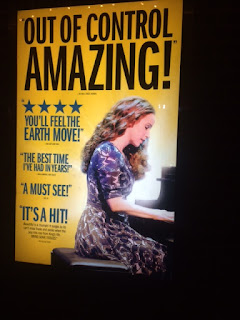 Beautiful is the Carole King story. King's Tapestry album was a key component of my college soundtrack so, of course, I knew many of the songs in this show as well. What I didn't realize about the show until we saw it is that it not only tells King's story but that of other singers and songwriters of the time who worked with and around her. Again, as with Jersey Boys, it was like taking a step back in time to those carefree days of high school and college and the music that framed the tapestry of my own life. While I already knew a lot about the artists showcased in both musicals (Tiger Beat was my first magazine subscription), I learned new and interesting things about both during the shows. If you visit New York or the traveling company of either show comes to a theater near you, I highly recommend seeing both of them.

You know how I mentioned up above that I like to talk to people? As we were waiting for Beautiful to begin, I started chatting with the woman who was seated beside me. Turns out she's from a town in Michigan that's 14 miles from where I grew up. Also, during the 90's, she taught at one of the grade schools I attended in my small hometown. Then she introduced me to the couple traveling with her and her husband. They were closer to my age, grew up in a farming community on the other side of my hometown and we discovered we share many mutual friends. What are the odds that I would travel from North Carolina to New York City and meet someone from the small Michigan town (population 1800) where I grew up? Amazing, the things you discover when you say hello to a stranger!


Restaurants were, of course, another priority of our trip. My friend laughed when I told her a barbecue place was high on my list of "must visit" restaurants. After all, we live in the south where barbecue is king. Let's just say she was a wee bit skeptical about putting NYC and good barbecue in the same sentence but once she tasted the mouth-watering moist brisket at Hill Country Barbecue Market she was singing a different tune! Full disclosure: I was skeptical too when my friend, Stacey Agdern introduced me to Hill Country during the RWA conference in NYC last July but I'm now a believer. I've eaten some really good barbecue over the years but Hill Country's is the best I've ever tasted. The. Best.


If you watch The Chew you've probably already heard of Mario Batali's Eataly.


Walking through Eataly is like taking a stroll through an Italian village on market day. The cheese market alone would have kept me happy for days.

There are a number of specialty restaurants - sit down and take out - scattered throughout. We chose La Pizza & La Pasta for their gluten free options and it was fabulous. Other Eataly restaurants include Il Pesce (a raw bar plus Italian seafood in antipasto and main dishes), LeVerdure (soups, bruschetta, and warm or cold dishes spotlighting seasonal Italian veggies), Birreria (a rooftop restaurant and brewery serving hearty meals featuring housemade sausages, meat and cheese plates, etc.), and Pranzo (a specialty lunch restaurant that educates diners about regional Italian cuisine).

Rounding out the restaurants are La Piazza (a stand-up food and drink bar featuring tastings of meats and cheeses and a raw bar), and Manzo (a formal restaurant). Then there are the cafes where you can buy your food to go: Focacceria with its traditional Italian breads made daily, the Gelateria (who doesn't love freshly made gelato?), Nutella (served in crepes, gelato, pastries), Panini (hot or cold made to order), Pasticceria (fresh pastries and cakes), Rosticceria (rotisserie chicken, meat with sides, and sandwiches made to order). And, of course, Eataly Vino, where you can choose Italian and local wines to take home. See what I mean about Eataly being an experience? It's not to be missed!


Speaking of experiences, if you like cheesecake, Junior's is one place in NYC that you will not want to miss. I've eaten there many times - thanks to the Times Square restaurant's convenient location across the street from the RWA hotel - and have never been disappointed. A casual, family-friendly restaurant with seating inside and out, Junior's is great for breakfast, lunch, dinner, or my favorite post-theater/post-RITA ceremony meal: steak fries and cheesecake. Hey! Don't knock it 'til you've tried it! :) We ate there twice during our recent stay (try the fresh mozzarella omelet - it's fabulous) and popped in a third time to pick up cheesecake to go for a late night, post-theater snack in our hotel room. They have multiple locations so wherever you stay, there's bound to be a Junior's in the vicinity.


While New York is a thoroughly modern city in what it offers, it's also a city that appreciates its history. The best way to see both the modern and historic sights of Manhattan, Brooklyn and other areas - in my experience - is to take a double-decker, hop on, hop off, bus tour. There are closed buses but for the best views I prefer the ones with an open-air upper deck. We took the Uptown and Downtown tours and had outstanding tour guides - both native New Yorkers - for each. Although I'd taken the tours on a previous visit, I still learned something new this time around...and took some great photos!


Another tip for a trip to NYC - or any city, really - is to expect the unexpected. You never know when an opportunity will drop into your lap. Thursday morning, we were standing outside Rockefeller Center buying tickets to go to the Top of the Rock observation deck when a representative from the Meredith Vieira Show approached us with free tickets to that day's taping. We decided to take a detour from our planned schedule and go. The show isn't shown in my market so I'm not sure if we made it onto TV but we had a good time. While waiting to be taken into the studio I started chatting with two women (from Florida and Georgia) sitting next to us. The woman from Georgia was in the audience for Oprah Winfrey's first "Favorite Things" episode. She told me that, yes, it was just as fabulous as you would imagine!

We did make it to the Top of the Rock after the Meredith taping. The views from the observation deck are spectacular, especially on a clear day, but be prepared if - like me - you have a fear of heights. The (open air) rooftop deck is 70 floors above the ground. I get jittery just typing that!

I've managed to conquer my fear twice now and even took a video this trip that required me to walk around (so proud) though I'm sure my hand was shaking. ;-) 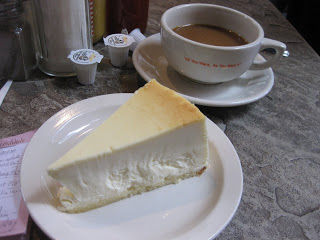 So what did I learn on this trip? I learned that traveling with a friend can be a fun and adventurous experience. I learned that even though this was my fourth trip to NYC, I have so much more to see there. I learned that there is no such thing as too much cheesecake. I learned that while I've enjoyed the theater for most of my life, there's nothing quite as exciting as theater on Broadway. I learned that sometimes you find the best food in the most unexpected places (barbecue in NYC) and I learned that I could visit Eataly every day of my stay and never get bored.


For more photos of my trip, check out the NYC October 2015 photo album on my Facebook page.


Have you taken a girlfriend trip? Where did you go? Did you enjoy it? Did you learn something new?

Have you been to New York City? What was your favorite part of the trip?

Are you planning any trips for 2016? Where are you going? Where would you like to go?

What foods set your taste buds to dancing?