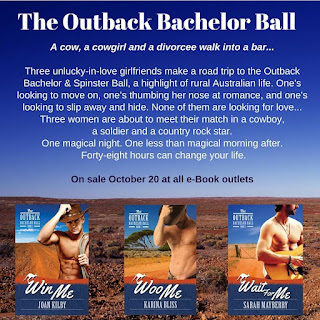 The Outback Bachelor Ball consists of three connected novellas. Ellie McFarlane, Jen Tremaine, and Beth Walker have been besties since their boarding school days fourteen years ago. Now each needs to conclude a chapter in her life. Ellie has declared a moratorium on pining for a cowboy who treats her like a kid sister, Jen has just been dumped by a colleague who has fallen in love with his ex-wife, and Beth has been publically humiliated by a country music-star ex-husband whose cheating ways are notorious. When Ellie proposes a reunion that includes attending the annual Dubbo Outback Bachelor and Spinster Ball, they not only agree but add a dare for each of them to make things more interesting. Ellie agrees to a makeover, Jen plans to attend in a cow costume, and Beth promises to dance with every half-way decent male who asks her. None of them expects to find their very own Prince Charming at the Outback ball.

Win Me by Joan Kilby

Ellie McFarlane has been in love with Rick Drummond, the manager of her father’s cattle station, for what seems like forever, but Rick persists in treating her like a younger sister. Ellie still cringes with embarrassment when she remembers the one time she tried to prove to him she was no longer a kid. She returns home to Australia after six years in Wyoming to discover that absence has not made Rick’s heart grow fonder. He not only still treats her with the casual affection of an older brother but he is considering buying the homestead that had been in his family for generations before it was sold after his father’s death and leaving Coolibah. Ellie knows it is time to move on. And the Outback Bachelor and Spinster Ball is just the place to prove she’s all woman and not anyone’s kid sister.

When Rick arrived at Coolibah fourteen years ago, Ellie was just a kid. He understood when Ellie’s father warned that the five years separating Rick and Ellie made her off limits. Even when Ellie was no longer a kid, Rick found it easier to think of her as one. She was still his boss’s daughter, and he was a guy with nothing much to offer. But seeing just how sexy Ellie is dressed for the ball and just how jealous he is at the thought of her with someone else threatens his resolution. But even stargazing and hot sex aren’t enough to ensure an HEA. Sometimes a man has to speak his heart to win his lady.

Woo Me by Karina Bliss

Scarred by her parents’ acrimonious divorce, Jen Tremaine has made sure her head was in control when it came to matters of the heart. She was careful not to date her co-worker Karl until two years after his divorce, after his rebound flings. She still ended up feeling like the other woman when Karl and his ex-wife got together again. She even resigned from a job she loved to keep his children from being confused and hurt. Although she is thrilled to be reunited with Ellie and Beth, she has no interest in hooking up at the ball. Of course, dressed as Clarabelle the cow, she probably won’t find that an issue anyway. But then she meets the luscious Logan Turner, a security guard who wreaks havoc on the guards cautious Jen has set in place.

Logan agreed to security guard duty only after his youngest sister begged for his help. A former Special Forces soldier, he is at loose ends, unsure of his future. The only thing he is certain of is that the Outback Bachelor and Spinster Ball is a terrific site for a man who has been celibate too long. When he first sees the person in a cow costume, he thinks the creature is male; his interest is focused on the two beauties with the cow. But by the time he comes to the rescue on three occasions, he is charmed by her wit and humor; and by the end of the night, Logan is thinking of a future with Jen.

But what Logan sees as a beginning, Jen sees as a single, perfect night. After all, she’s leaving Australia for New Zealand and a new job, and everyone knows that long-distance relationships never work. And she is afraid to risk her heart. But what if the biggest risk is losing all the happiness that love and Logan promise?

Wait for Me by Sarah Mayberry

Beth Walker is in serious need of distraction. She returned to Australia after her four-year marriage to a country music star imploded under the weight of his numerous infidelities. Not only is Beth broken-hearted and disillusioned, but she is also filled with self-recrimination and weary of running from the relentless paparazzi. Australia offers the unwavering love and support of her best friends. But beer and half a dozen dances have done nothing to make her more attuned to the festive spirit of the Outback Bachelor and Spinster Ball. Beth is ready to leave when she spots Jonah Masters, an old friend who, along with his band, was once an opening act for her ex.  The last thing she wants is to see pity in the eyes of Jonah, who was on the scene when Beth heard the first rumor of her ex’s unfaithfulness and refused to believe it. But Jonah insists they have coffee, and Beth, who is finally and unexpectedly distracted by the feelings Jonah awakens in her, agrees.

Jonah knew from the moment he met Beth that she was the woman his heart was seeking, but since she was married, he settled for being her friend. Now that Beth is free and fate has placed them both at the ball, he feels as if he has been given a second chance. But even though their one night together ends with her agreeing to go with him to inspect the home he is thinking of buying, Jonah knows Beth is still not ready for a new relationship. Waiting may be wise, but it is hell—and there is no guarantee  that it will end in lovers meeting. Regardless, Jonah is willing to wait, and Beth is eager to heal.

I love a well-written novella, and I was intrigued by the three-blackbird idea of connected stories occurring simultaneously. I also loved the modern Cinderella-at-the-ball motif with best friends instead of wicked step-sisters, a ute instead of a carriage, and a trio of hot, rugged Aussie heroes instead of a pretty prince. Then, there was the fact that the stories were written by authors who had added books to my keeper shelves. Nevertheless, I was a bit concerned that the length would mean lots of insta-lust and scant character development.  I’m happy to say my fears were groundless.

Win Me and Wait for Me feature couples who have a history when their stories begin, and although Jen and Logan in Woo Me do meet at the ball, they develop a friendship with a surprising degree of intimacy before they become lovers. I found all three couples engaging, and the enduring friendship of the three women was not just a device for getting them to the ball but an integral part of all three stories. The Outback Bachelor Ball  was a winner for me. If you like contemporary romance with characters who are likeable and real and whose stories truly are about love rather than merely lust, you should add these three novellas to your to-be-read list ASAP.

Note: I don’t know if it was intentional or coincidental, but I got a giggle out of the fact that all three heroes gave articles of their clothing to the heroines. In one case, it was literally the shirt off his back. :)


Cowboy, musician or ex-Special Forces? Which hot Aussie would do it for you?

Jen attends the Outback Bachelor and Spinster Ball dressed as a cow. If you were attending a ball in costume, what costume would you choose? 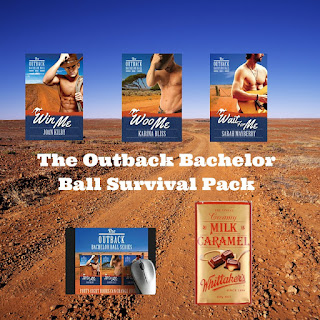 
Click on each name for more information about Joan Kilby, Karina Bliss and Sarah Mayberry.