Review - - Marry Me at Christmas 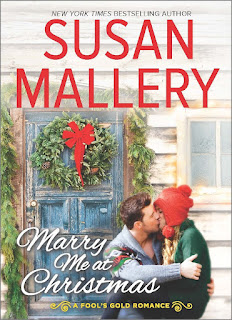 Engagements, weddings, and babies have become commonplace among Madeline Krug’s friends in Fool’s Gold, California, but the only romance of note in Madeline’s life is her well-known celebrity crush on action star Jonny Blaze. Madeline is surprised when Mayor Marsha suggests Madeline fill in for over-extended event planner Dellina Hopkins to plan a Fool’s Gold wedding for a newcomer to the town. As the manager of the bridal shop of Isabel Beebe Hendrix’s boutique, Paper Moon, Madeline may be a logical substitute for Dellina, but helping a bride choose a dress is not the same thing as planning a wedding, and Madeline is anxious. Her anxiety ratchets up when her client turns out to be none other than Jonny Blaze himself .

Jonny, who views his celebrity status as little more than an accident, has bought a home in Fool’s Gold as a refuge from the artificial life he experiences in Hollywood. He is looking for a place where he can be just an ordinary guy. And yet he is surprised when that is exactly the way the citizens of Fool’s Gold treat him. They welcome him and make him a part of the town, but they don’t kowtow or besiege him for autographs and photos. He falls in love with the town and its inhabitants, including the eerily prescient mayor and the quirky senior citizens Eddie and Gladys. (He even indulges their obsession with male butts.)

Madeline is a bit starstruck at first, but by the time she has had to reign in Jonny’s grand plans in order to keep the wedding more in line with the small, intimate gathering his sister envisions, she has begun to know Jonny Blaze the man rather than Jonny Blaze the celebrity. A genuine friendship develops between this unlikely twosome as they slowly recognize they are falling in love.  But can love between an honest, ordinary boutique manager and a sexy superstar that blooms in Fool’s Gold survive the harsh glare of fame in the larger world?

Marry Me at Christmas is the nineteenth book in the Fool’s Gold series that began in April 2010 and is still enchanting readers almost five and a half years later. Mallery has consistently peopled her fictional town with characters her readers find likeable and engaging.  Some of us would argue that the occasional hero is the exception that proves the rule, but this hero is an appealing, sympathetic character. (I think comparisons to Johnny Depp will be inevitable, but since I’m not a Depp fan, I tried to ignore similarities.) Madeline has already won over many series fans in her appearances in other books. I found her sweet and funny and flawed enough to seem real.

The book contains a sizeable cast of secondary characters. I especially enjoyed Madeline’s family. There is the usual complement of characters from earlier books and appearances by a character or two destined for lead status in upcoming books. (Shelby Gilmore, I’m looking at you.) Series fans will likely welcome glimpses of favorite characters; other readers may be less happy with their inclusion. Fool’s Gold #19 will not make my list of favorite Fool’s Gold books: Two of a Kind, All summer Long, and Only Yours (in that order) head that list. However, Marry Me at Christmas is a satisfying addition to a series that is holding up remarkably well, and it is a lovely Christmas romance.  I decided many books back that I would never refuse a ticket to Fool’s Gold. I am already anticipating next year’s visits. If you like this series, if you like small-town romances generally, or if you like sweet holiday stories, I recommend this book.