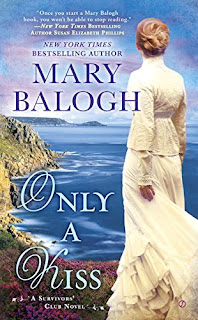 When the widowed Imogen Hayes, Lady Barclay, cousin to George Crabbe, Duke of Stanbrook, left Penderris Hall, the duke’s home, after three years there as the only female member of the Survivors’ Club, she chose to make her home in the dower house on the estate of her father-in-law. Although Imogen was fond of her father-in-law and of his spinster sister Lavinia, she valued her privacy too much to live at Hardford Hall. For five years, Imogen has maintained social contact with family and friends while preserving her emotional distance. The high point of each year has been the annual reunion of the Survivors’ Club, the three weeks she spends with her dearest friends. She moves to Hardford House only when forced to do so by damage to her roof, and she is confident the move is temporary. Just as soon as the roof of the dower house is repaired, she plans to resume her life there. Even the old earl’s death two years ago did little to alter her life. Since the new heir, offspring of an estranged branch of the Hayes family, made no contact with his Cornwall relatives, it has been easy to forget his existence. Imogen is none too pleased when the heir sends word that he will be arriving at Hardford Hall shortly. She rightly suspects that his arrival will mean the end of her peaceful existence.

Percival William Henry Hayes, Earl of Hardford, Viscount Barclay, is a man who has everything. The only child of doting, wealthy parents, he has been cherished and indulged since his birth. Blessed with wealth, intelligence, good health, and good looks, he belongs to a close-knit, loving family with Aunts, uncles, and dozens of cousins on both the maternal and paternal sides. Two years ago, he unexpectedly inherited his titles when the old earl died the year after the death of Percy’s father. On his thirtieth birthday, Percy recognizes two facts: he is “the most fortunate of mortals” and he is bored beyond endurance. In an inebriated state after a convivial birthday celebration with friends, he decides that the solution to his boredom is to increase it with a visit to his Cornwall estate. His hope is that life in that remote area will prove so dull that his usual routine during the London season will become more appealing by comparison.

Percy and Imogen clash at first sight. His first words to her when she dares to walk into his house unannounced are, “And who the devil might you be?” He is offended by the reserve he senses in Imogen and none too happy that he is sharing his home with her, with Cousin Lavinia and her collection of stray animals, and with Lavinia’s cousin and companion, the male-bashing Adelaide.  None of them is impressed with this young lord who is accustomed to being admired and idolized. Imogen does not hesitate to challenge him or to stop his questions with a direct reminder that some things are none of his business.

Of course, underneath the clashes, there is reluctant attraction on both sides. Disagreements lead to conversations. Imogen and Percy come to know each other, and they are good for one another. She is completely different from any other woman he has known. She not only refuses to accept his right to exercise authority over her, but when he bemoans his empty, frivolous life, she scolds him for his ignorance of how truly blessed he is:
Your life has been so full of love, Lord Hardford, that it is fairly bursting at the seams with it. Even that dog loves you, and you love it. It is not unmanly to admit it. And your life has included a period of intense learning about two of the greatest civilizations our world has known.”

For his part, Percy provides Imogen with practical help. He uses his money and his influence to see that her new roof is completed speedily. And he brings laughter into Imogen’s emotionally impoverished life. They become friends—and they become lovers, although at first neither of them thinks of their relationship in terms of forever. Percy also brings a fresh perspective to the pieces of a puzzle and connects such seemingly disparate things as his uncomfortable room, a suspicious servant, and the death of Imogen’s husband. In the process, he falls in love with life in Cornwall and with Imogen. But can he persuade his deeply scarred lady that she deserves a second chance at love and happiness?

Mary Balogh is amazing. Thirty years and more than eighty books after her debut novel—and she is still giving fresh twists to tired conventions. In this one, she reverses gender roles, adds a new definition of the heroic, and alters the pattern established in the first five books of the series.
The hero who has survived the war and returned home scarred psychically and often physically by his experience is standard in historical romance. Balogh has given her readers five such heroes in the preceding books of this series: Hugo Emes, Lord Trentham (The Proposal), Vincent, Viscount Darleigh (The Arrangement); Sir Benedict Harper (The Escape); Flavian Arnott, Viscount Ponsonby (Only Enchanting); and Ralph Stockwood, Earl of Berwick (Only a Promise). Balogh pairs each of these heroes with a heroine who has also proved herself a survivor. In this sixth book, it is the heroine who has returned from war scarred probably irreparably.  Imogen accompanied her husband to Portugal. When they were captured, he was deemed a spy and tortured while she was forced to watch. She was faced with a heinous choice that still haunts her. Although she bears no physical disfigurement, she is marked forever by her experience. In contrast, the hero has known a life of luxury and indulgence surrounded by people who love him.

One of Percy’s regrets is that his life has been devoid of the heroic. After he meets Imogen and begins to care for her, he wants to make her happy. He recognizes that laughter has been missing from her life, and he exults in his ability to make her laugh.

He wondered if she was smiling, if only inwardly. It would be a worthy, heroic thing to do, he thought, to make this woman laugh again as she had laughed at the Kramer house, and to make her do it again and again. Perhaps he ought to make that his life’s mission.

One of the recurring theme in Balogh’s novels is that a simplistic happily-ever-after will not be the reality of her protagonists. Often she has them directly acknowledging that life will be uneven, filled with sorrow as well as joy. In Only a Kiss, Imogen and Percy recognize that the damage done to Imogen cannot be erased, but the love she and Percy share can make her stronger, more willing to laugh, and more open to all that life has to offer.

The only thing that kept this from being a five-star read for me is the smuggling thread. I am not a fan of smuggling plots. However, Balogh does not romanticize or trivialize smuggling. She shows the ruthlessness of the leaders and the rigid control they exercised over those in their sphere of influence. She also connects it to the main plot so that the thread becomes integral rather than distracting.

The Survivors’ Club books overall have been among Balogh’s finest work, and Only a Kiss is a worthy addition to this excellent series. I highly recommend it.  The series ends with the release of Only Beloved, the story of George Crabbe, Duke of Stanbrook, on May 3, 2016. I have it on pre-order, and I fully expect to be as enthusiastic about it as I have been about the other six.