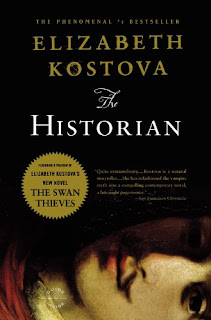 As THE ROMANCE DISH is primarily a romance book review site, many of you may recall the blog, SQUAWK RADIO, helmed by no less than romance writing giants Connie Brockway, Christina Dodd, Teresa Medeiros, Eloisa James, Lisa Kleypas, and Elizabeth Bevarly.

So when Connie Brockway, at the behest of Christina Dodd, suggested ten years ago we readers go out and get THE HISTORIAN, I did as I was told.   She’s a writer who reads.   And because I love both Brockway and Dodd’s writing, I knew I was in for a treat.

A Halloween treat, no less.

THE HISTORIAN begins with an adolescent girl exploring her scholarly father’s library where she finds letters addressed to:  “My dear and unfortunate successor.”  So opens a door into the dark world of Vlad the Impaler, Dracula himself, and, strangely, into the hidden past of the girl's father, which seems inextricably linked to the medieval ruler.

Told from several points of view and through a variety of mediums—present conversations, old letters and documents, and recollections—THE HISTORIAN spans generations, time periods and countries.  It is a book rife with historical detail so seamlessly blended with fictitious legend, you find yourself reaching for the garlic despite your good sense.   But I admit it isn’t the skilled combination of truth and fiction that kept me at this nearly 650-page novel (though who can resist a good Dracula adventure story in October?).  It is Kostova’s writing that is the true page-turner here.   Lush and thick with gorgeous detail, yet peppered with the perfect amount of creepy thrills… I could not put it down.    I even remember Connie Brockway’s thoughts on Kostova’s talent ten years later:

“I am so taken with this book! It’s not the plot or the story, which is a hunt for the historical Dracula, it’s the writing style that has me staying up at night, allotting myself only 75 pages a shot so that it lasts a long time. Have any of you ever done this?  It’s clean, evocative, with a purity of language that has me frankly jealous.”

If Connie is jealous of Kostova’s style, what are the rest of us to feel?   I tell you what.  We’re to feel the pleasure of Kostova’s writing.   We’re to thirst for it with the zeal of a vampire sensing blood.

Just listen to this description of France as told by the daughter remembering her bookish, adolescent youth:

We took the train to Paris and later a car south into the Cévennes.  In the mornings I worked on two or three essays in my increasingly lucid French, to mail back to school.  I still have one of these; even now, decades later, unfolding it returns to me that feeling of the untranslatable heart of France in May, the smell of grass that was not grass but l’herbe, edibly fresh, as if all French vegetation were fantastically culinary, the ingredients of a salad or something to stir into cheese.

I am in France because I can taste and smell it all through the magic of Kostova’s word combinations.  The book is loaded with such passages—those that make a reader stop, reread, and highlight—so much so I found myself savoring the hours spent pouring over it.

And here’s yet another taste, from the same bookish character regarding her first experience with mastering a foreign language:

Never before had I known the sudden quiver of understanding that travels from word to brain to heart, the way a new language can move, coil, swim into life under the eyes, the almost savage leap of comprehension, the instantaneous, joyful release of meaning, the way the words shed their printed bodies in a flash of heat and light.   Since then I have known this moment of truth with other companions:  German, Russian Latin, Greek, and—for a brief hour—Sanskrit.

If any of you have learned another language, you know the beautiful truth of every single syllable in the above paragraph.

I’m gushing, I know.  The writing is that good.   But I admit it is not the perfect book.   I have some issues near the end, as well as impatience with details that could have been pared back.   Still.   THE HISTORIAN is worth the 650-page effort.

What are some of your favorite creepy reads?  THE HISTORIAN is now mine.