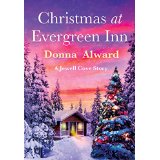 The Evergreen Inn in Jewell Cove, Maine, with its lavish decorations may look festive and in tune with the Christmas season, but Lainey Price, the owner of the inn is definitely out of tune with all things Christmas. A year ago, she was looking forward to the wedding of her dreams—a Christmas wedding—and a happily ever after with the man she loved, but a week before the wedding, her fiancé told her he had fallen in love with someone else. Lainey spent the week before Christmas cancelling wedding plans. Even though she has moved on with her life, even accepting that it was best Jason broke things off before they married, Christmas has lost its magic for her. Her once favorite holiday is now just a reminder of the bleakest period of her life.

Police officer Todd Ricker is on his way home when he happens across a stranded motorist. With a blizzard headed for Jewell Cove, the wisest course of action seems to be to take the motorist to Evergreen Inn and hope Lainey has room for him. The inn is filled with others seeking shelter from the storm, and by the time Lainey finds a spot for her newest guest, there is literally no room at the inn. When it becomes clear that Todd can’t make it home, Lainey offers him the couch in her cottage, and Todd accepts gratefully.

Lainey and Todd have known each other forever. They both had a bit of a wild streak in high school, and when they found themselves at the same parties, they eyed each other, sensing the potential but not quite brave enough to act on their instincts. The attraction still simmers, and they enjoy flirtatious exchanges.  But neither of them is prepared for what one kiss can start. Lainey is wary because Jason has the reputation of a player, but Jason knows what he has discovered with Lainey is unlike his previous relationships: “From the moment he’d taken her in his arms, he’d known that this was something different. Something special that he couldn’t take lightly or laugh away in the morning. Something that had never happened to him before, ever. . .”  And he is not about to give up on what they can have together.

I’m a fan of this series and have been since I read The House on Blackberry Hill. Last year’s holiday novella, Christmas at Seashell Cottage, was one of my favorite reads of the season. Although I was not quite as captivated by this one, it is still a delightful story. Alward’s greatest strength is her ability to create characters that feel real, and she does that again with Lainey and Todd. The seriousness with which they treat their work, their banter with one another, and their reactions when they find their emotions more intense than they expected all added dimensionality to their characters. I found them likeable and engaging. Anyone who has ever experienced a great loss during a holiday season—whether the loss is a breakup or a death—knows that afterwards the holiday is tainted by remembered pain associated with it. Lainey’s reaction seemed quite credible to me, as did the way her relationship with Todd developed.

There were other things that I really liked about this story. Lainey is mixed race, and I appreciate that Alward makes Jewell Cove a community with some diversity. I liked the fact that this is a Christmas story not just a story that uses the holiday like a backdrop.  Fans of small-town romance, and fans of Christmas romances that offer a bit of sweetness, a bit of sizzle, and a lot to love will enjoy this one. For those of you who don’t share my series addiction, Christmas at Evergreen Inn can be read as a standalone. 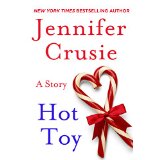 It’s Christmas Eve, and Trudy Maxwell is in a toy store desperately seeking a military action figure that spews toxic waste, the “Hot Toy” upon which her five-year-old nephew’s belief in Santa and the trustworthiness of adults depends. Predictably, the shelves where the toy was displayed have been wiped clean of any traces of the toy by other desperate parents and aunts. But Trudy refuses to give up. Her nephew, Leroy, needs this toy, and Courtney, his mother (Trudy’s sister) needs for him to have it.  Leroy’s father and Courtney’s husband recently abandoned his wife and child for Leroy’s nanny, and that loss has given the toy, which his father promised him Santa would deliver, a significance far beyond a mere gift from Santa. Trudy will not let them down. She is convinced that someone has secreted one Hot Toy on another shelf, and she ransacks the shelves to find the hidden toy.

While she is engaged in ransacking, she meets Nolan Mitchell, a professor of Chinese literature whom Trudy dated briefly. She had hopes that he was The One, but he dropped her with no explanation after four dates. When Trudy finds one of the Hot Toys at last, albeit last year’s model and minus the toxic waste, Nolan offers to buy it from her at increasingly inflated prices. It turns out that Nolan is a spy, and concealed in the toy Trudy has are—gasp—secret codes. Nolan is after the codes before they fall into the hands of a double agent. Danger threatens as Trudy tries to hold on to the toy and tries to make the right choice about whom to trust. Can all this possibly lead to an HEA, or even a HFN?

If you are tired of sweet Christmas romances with idyllic settings and an abundance of traditional trimmings, you should appreciate Hot Toy, a story in which faith in Santa may be lost, a mother is drunk on grief and gin, and the gingerbread house threatens to collapse. Trudy is a typical Crusie heroine, a wiseass with a big heart who has survived some slaps upside the head from life but who has the stamina to go a few more rounds if necessary. One the action starts, the pace is wicked fast, and the story has the over-the-top feel of a bad movie. Only here that feel is part of the fun, as is the Hot Toy, a MacGuffin. The name is a reference to the Hitchcockian term for a plot device that has no importance for what it is but only as it moves the plot. In Crusie’s hands, the MacGuffin is both an inside joke and a twist on Hitchcock’s definition since Crusie’s MacGuffin is important for what it is and for what it reveals, literally and symbolically.

Superficially a caper, the novella at its center is about believing. More than anything Trudy wants to protect Leroy’s belief in Santa and all that belief represents to him. Almost as much, she wants to cling to her own, almost lost belief in happy endings. Crusie also strikes a blow at the commercialization that has reduced the religious meaning of Christmas to snatches of an over-played song and hand-written words on wrapping paper.


Hot Toy is a great change of pace. It will make you laugh and may make you think. I definitely recommend it.