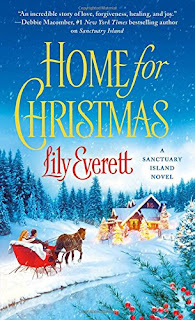 Lily Everett offers readers a contemporary take on the classic 1940s Christmas movie, Christmas in Connecticut in the latest addition to her small-town series.

Like Elizabeth Lane (Barbara Stanwyck) in the movie, Libby Leeds is a journalist who has made a name for herself writing about her idyllic life, but her column for Savor magazine is based on a tissue of lies—or a lovely fiction, if one wants to be kind. Libby’s reality, like Elizabeth’s, is a small New York City apartment from which she weaves her accounts of the life of the fictional Libby’s life, a life filled with the warmth of family, a cherished old house, a happy marriage, and superior domestic skills. The real Libby is single, she literally cannot boil water, and her only close family is her Uncle Ray who gave her a home after she was orphaned. Libby’s income from her writing pays for Uncle Ray’s care at an assisted living facility.  Libby did live on Sanctuary Island until her parents were killed in an automobile accident, but due to Uncle Ray’s estrangement from his father, Libby doesn’t know her grandfather and other family members. And she hasn’t been back to Sanctuary Island since she left as a ten-year-old.

Along with most of America, Libby has been captivated by the story of Sergeant First Class Owen Shepard, a decorated hero (like Jefferson Jones, hero of Christmas in Connecticut), who wants to give his young daughter a perfect Christmas. Libby has just watched the famous interview with Sgt. Shepard for the fifty-first time when she gets a phone call from her boss with the news that Shepard and his family, who serendipitously live on Sanctuary Island, will be spending Christmas with Libby and her family.  Even the truth can’t save Libby. When she confesses, her boss tells her she can host Shepard and his family at her grandfather’s home or be sued for fraud.
Owen Shepard is not exactly filled with the joy of the season as he makes his way to Sanctuary Island. First, he is still reluctantly accepting that the army has put him on the Permanent Disability Retired List and determined that his status will not be permanent. Then, there’s the second stage of rehabilitation which is scheduled to take place at the Windy Corner Therapeutic Riding Center and Owen’s reservation about that. His biggest concern is about being a father to his eight-year-old daughter, whom he has never seen.

Libby and Owen end up on the same ferry to Sanctuary Island, and the self-sufficient Owen finds himself talking to Libby about himself with an openness that is out of character for him. As for Libby, she finds Owen in the flesh even more appealing than Owen on her computer screen. But, of course, Owen thinks Libby is a married woman, and her status is confirmed when she is greeted upon arriving at Sanctuary Island by her “husband,” actually her cousin Nash, who has his own tangled romance to complicate matters further.

But Christmas is a season for miracles, and there are quite a few in store for Libby and Owen as truths are told, families are reunited, and hearts are healed.

Scrooges and grinches should be aware that they may suffer from an overdose of sweetness while reading Home for Christmas. This is a very Christmassy Christmas story, complete with gingerbread houses, snow angels, mistletoe, a mysterious Santa who closely resembles the mythic figure, and a nativity play in the next thing to a stable with live animals and Owen’s daughter as Mary—but riding a pony instead of a donkey. Since I am an avowed sentimentalist when it comes to the season, I loved it. It probably helped that Christmas in Connecticut is a movie I watch every December along with It’s a Wonderful Life and Miracle on 34th Street (the one with Edmund Gwenn and a young Natalie Wood).


This is the fourth book in Everett’s Sanctuary Island series (not counting the six connected Billionaire novellas), and I think it is the best one since the titular book that debuted the series. If you like your Christmas romances on the sweet side with lots of traditional trimmings and just enough sizzle to keep the temperature toasty, I predict you will enjoy Home for Christmas.

~Janga
Posted by pjpuppymom at 2:00 AM