It's my pleasure to share with you the first chapter from Anna Bradley's upcoming debut novel, A Wicked Way to Win an Earl. Bradley is a terrific new voice in historical romance. I hope all of you will enjoy her writing as much I did!

Anna Bradley has been an avid reader, writer and book fondler since childhood, when she pilfered her first romance novel and stole away to her bedroom to devour it. Her insatiable love of the written word eventually resulted in her master’s degree in English Literature.
Before she became a writer, Anna worked with a rare books library featuring works by British women writers from the 1600s through the Regency period. There she indulged in her love of stories, fondled rare, leather-bound volumes to her heart’s content and dreamed of becoming a writer. That library is now part of the Center for the Study of Early English Women Writers in Alton, New Hampshire.
Anna writes steamy historical romance (think garters, fops and riding crops) and squeezes in a career as a writing and literature professor on the side. She lives with her husband and two children in Portland, OR, where people are delightfully weird and love to read.

The spring mud seeped through the thin soles of her leather walking boots and began to creep into her stockings. This was no ordinary mud. Before long it would be tickling her garters.
“Blast it,” Delia muttered halfheartedly. She’d known it was a mistake to come here. A mudslide would certainly prove her right, wouldn’t it? There was a sort of grim satisfaction in being right, though at the moment she’d settle for being dry. And clean. And home, instead of stranded on a deserted road in Kent, with the sky turning dark over her head, at grave risk of being buried in a freak mudslide.
At the very least she should have listened to her sister Lily and stayed with the carriage, but no, she’d insisted on finding help, and now here she was in an awful predicament—
Delia stopped suddenly, one foot in a puddle. Was that . . . yes! She crossed her fingers and sent a quick prayer up to heaven the noise she’d just heard was not a bear or some other wild animal.
Were there bears in Kent?
Delia strained to hear, and waited. No, it wasn’t a bear. That is, unless the bears in this part of England were prone to high-pitched giggling. She pulled at her foot with some force to dislodge it from the puddle. The sound was coming from farther up the road, around the other side of a bend.
She staggered forward as quickly as her sopping skirts would allow. It was odd to hear giggling on a lonely road at dusk, but she was in no position to be choosy. All she wished for in the world was one single person who could help her find a conveyance. One human being. Was that too much to ask? Anyone would do. Anyone at all.
She trudged around the bend, dragging her hems.
Oh, dear. One did need to be careful what one wished for.
She squinted into the dusk, trying to make sense of the two shapes leaning against a tree. It was a woman, and she was . . . the squint turned into wide-eyed shock. Delia froze, as if the mud at her feet had become quicksand and she was sunk up to her neck in it.
It was a woman, indeed, and she wasn’t alone. She was engaged. With a man. A very large man. He was at least a head taller than his companion. If the woman hadn’t been giggling, Delia would have missed her entirely, hidden as she was by a pair of impossibly wide shoulders. The man had discarded his coat, which hung carelessly over a wet tree branch. Without it, his white shirt was just visible in the dusk, and under it what appeared to Delia to be miles of muscled arm and long, sinewy back.
Well, he wouldn’t need his coat, would he? Not for what he was doing. It would only get in the way. 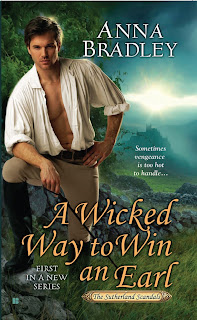 What debut authors have you discovered this year?

The banter between Alec and Delia is so much fun. Do you enjoy a heroine who gives as good as she gets?

One person who leaves a comment on today's post will receive a Kindle copy of A Wicked Way to Win an Earl. (available Nov. 3)

Stop by Wednesday, November 4th when Anna Bradley will join me for a Q&A!

England, 1811. Delia Somerset despises the privileged ton, but her young sister, Lily, is desperate to escape their family’s scandalous past and join high society. Unwilling to upset her sister, Delia reluctantly agrees to attend a party at the Sutherland estate—and avoid the gossip at all costs.Alec Sutherland is known as a hot-headed scoundrel, but nothing gets a rise out of him as much as the news that his brother desires Delia’s hand in marriage. She is, after all, the daughter of the London belle who soiled their family name. He’s determined to ruin her reputation as well, in the most delicious way possible. It’s only a matter of time before he can woo her with his irresistible advances.As Delia devilishly plays along in Alec’s game, determined to prove the joke is on him, they inch ever closer to repeating history. And in this game of seductive glances, scandalous whispers, and old debts, the outcome might be much more than either of them anticipated…