Review - - The Christmas Cottage / Ever After 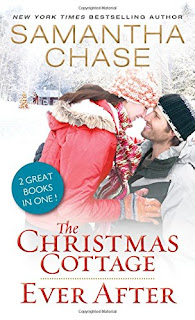 This is a dual reissue of connected books released originally in 2012 and 2013 respectively.  In The Christmas Cottage, Lacey Quinn, as maid of honor, has been charged with preparing the legendary Callahan Christmas Cottage to the specifications of Ava Callahan, Lacey’s life-long best friend. According to Callahan family lore, everlasting love is assured any couple who spends the night in the Christmas Cottage, and Ava is determined to give her marriage this protection by spending her first night as a married woman in the cottage. In fact, Ava is so determined that everything be perfect that she has prepared a notebook with seventeen sections of instructions for Lacey, and just in case the preparation may be too much for Lacey, Ava has enlisted the help of her older brother and her fiancé’s best man, Ean Callahan, much to Lacey’s dismay.

Ean was Lacey’s first love, and no one else has ever measured up to him. She also associates him with the most humiliating moment of her life. The evening before Ean was scheduled to leave for college, fourteen-year-old Lacey kisses him and tells him she loves him. Ean is horrified. Lacey has been a part of his life forever. She is his little sister’s best friend, and their parents are close friends as well. He is fond of Lacey, but at eighteen, he sees the four years between them as enormous. Plus his attention is on college, the new world awaiting him, and the realization of his dreams. He handles the situation gracelessly, and Lacey is crushed. She spends the next decade avoiding him, a task made easier by his infrequent trips home. She takes off for the Callahan ranch outside Asheville, North Carolina and the site of the famous cottage, expecting to get a head start on Ava’s to-do list so that the time she has to spend with Ean is limited.

Ean has found greater professional success than he ever imagined, but his life in Boston has begun to seem empty. He realizes how careless he has been about spending time with his family and determines to change that, beginning with his trip home for Ava’s wedding. But he wants some time to himself to think things through before the wedding, and what better place to be alone than the family ranch.  Predictably, Lacey and Ean get snowed in, but being forced into one another’s company gives them an opportunity to sort out the past. Once they do so, they discover love blooms even in the snow.

Lacey and Ean’s romance is a sweet one, and once they deal with their past, which they do in a manner befitting two adults, the obstacles to their HEA are relatively minor with the real messiness being reserved for Ava’s love story. I liked Lacey and Ean (although I kept wanting to see his name spelled Ian) and thought their story was a heartwarming Christmas story. The only thing I disliked in this story was Ava’s behavior.

Ever After takes place eight months after The Christmas Cottage. Ava Callahan hasn’t seen Brian McCabe since the night before her scheduled wedding to Brian’s best friend, Mason. Brian paid a visit to Ava, armed with a list of reasons she and Mason were all wrong for each other. His reasons must have been persuasive—or perhaps it was that sizzling kiss and his confession of love for Ava. At any rate, Ava and Mason called their wedding off, and Ava hasn’t seen Brian since that night. Although she has no regrets about her cancelled wedding, the obvious happiness of Lacey and Ean plus the news that Mason is newly engaged and Ava’s realization that her life is not going according to her plan has her feeling a bit sorry for herself.

Brian knows Ava is the one for him, and he is willing to be patient. He has bided his time for eight months, giving her space to get over her breakup with Mason. But with Mason engaged and Ava about to graduate with her degree in library science, he thinks it is time to make his move. He is disappointed but not discouraged when she turns down his dinner invitation. He just regroups and anticipates another chance.

Ava cannot deny that she finds Brian attractive, but the idea of dating the best friend of her ex seems strange. But Brian is persistent, and he is so-o-o good-looking and so thoughtful. And he knows her so well, remembering details like her favorite flowers and her dreams of travel. And her family likes him. Her dad even invites him to play golf, something he never did for Mason. Soon Ava is falling in love, and everything is grand—until Brian refuses to go along with her idea of perfection. Maybe he is not the right man for her after all.

Brian is a dream come true. He truly knows Ava, and he loves her for who she is. Unlike Mason, he is not interested in changing her. He is infinitely patient, incredibly kind and thoughtful, capable of romantic gestures, great with babies, and a terrific lover. But Ava is so hung up on her obsession with the legend of the cottage and every detail of her happily-ever-after love playing out according to her notion of the perfect romance that she can’t appreciate what she has.

Ava is a shade less irritating in this book than she was with all her self-absorption and bitchy moments in the previous book, and she does become self-aware eventually—although typically even then her reaction is over the top.  As for Brian, he is endearing, but I would have found him more credible if he had been less longsuffering and rather more humanly flawed. The best part of the second book for me was seeing Lacey and Ean living their HEA, sleep deprivation and all.

I liked The Christmas Cottage and have no hesitation in recommending it for contemporary romance fans who like their books heavy on the sweet, low on conflict, and light on sizzle.  One caution: despite the title, the holiday is very much sketchily drawn background in this book with no substantive Christmas connection. And unless you are a reader who must read all connected books, I cannot in all honesty recommend Ever After.