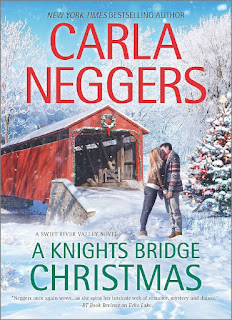 Carla Neggers takes readers back to Knights Bridge, Massachusetts for this sweet holiday romance, the fifth book in her Swift River Valley series.

Widow Claire Morgan and her six-year-old son Owen are new residents of Knights Bridge, having relocated to the small town from Boston when Claire accepted the position as director of the local library, successor to Phoebe O’Dunn, now happily married to Noah Kendrick (That Night on Thistle Lane). Claire’s marriage was brief but blissfully happy. Since her husband’s death, she has found her happiness in work she loves and in her young son who resembles the father who died before he was born. A devoted mother who tries not to be overprotective, she makes the move to Knights Bridge largely for the sake of her son. At first meeting, she writes Logan Farrell off as rude and arrogant, but his clear affection for his grandmother makes her reconsider. She may not be immune to Logan’s charm—or his kisses. But he plans to be in Knights Bridge only briefly, and Claire knows herself well enough to know that she is not a one-night stand type.

Dr. Logan Farrell is a busy ER physician who is in Knights Bridge only to see Daisy, his eighty-something grandmother, settled into her new quarters in Rivendell, the town’s assisted living facility. He plans to return to Boston and his fast-paced life there just as soon as he is sure Daisy is happy with the change in her life, but then Daisy asks him to decorate her home for Christmas one more time before the house is sold, making certain to place a particular candle in a window. Unable to deny his beloved grandmother her request, Logan begs Claire to help with the decoration.

When Claire agrees, the two, along with Owen, spend time together. Claire’s initial antagonism toward Logan soon yields to friendship and a growing attraction. Logan, who falls not only for Claire but also for her young son, finds himself spending more time in Knight’s Bridge than he had planned, enduring the taunts of his urban friends with a smile. But can the wary Claire open her heart and her life to a new love, and can the adrenalin addicted Logan be happy in small-town Knights Bridge?

Neggers offers readers a sweet romance with a generous portion of Christmas traditions and sentiment. Although this is not the strongest book in the series, it is an appealing holiday read, and fans of the series will be pleased to see characters from earlier novels appear in secondary roles. Knights Bridge is an attractive setting with a distinct regional flavor. However, I suspect that I will not be the only reader who finds the love story of Daisy and her late husband the most engaging part of the book. I recommend this book for readers who can’t resist a Christmas contemporary romance and for those who appreciate small-town romances with a low sizzle factor. Book six in the series, The Spring at Moss Hill, will be released January 26, 2016.