Sneak Peek Cover Reveal and Excerpt - - Listen To The Moon


If you're a regular here you already know that both Janga and I are ardent fans of Rose Lerner's writing, describing her books with phrases such as: "a treasure," "cross class romance," "a portrait of ordinary life," "willingness to write outside the norm," and "refreshingly atypical hero and heroine." Sweet Disorder, the first book in Lerner's Lively St. Lemeston series made Janga's Top 10 Romance Novels of 2014 and the second book in the series, True Pretenses is among my favorites for 2015. I'm delighted today to bring you the exclusive cover reveal and excerpt from the third book in Lerner's Lively St. Lemeston series, Listen to the Moon. I've already pre-ordered my copy and marked my calendar for January 5, 2016! 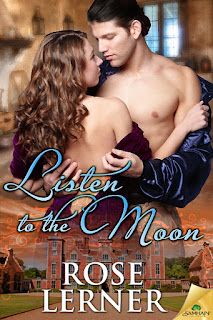 John Toogood dreamed of being valet to a great man…before he was laid off and blacklisted. Now he’s stuck in small-town Lively St. Lemeston until London’s Season opens and he can begin his embarrassing job hunt.
His instant attraction to happy-go-lucky maid Sukey Grimes couldn’t come at a worse time. Her manners are provincial, her respect for authority nonexistent, and her outdated cleaning methods—well, the less said about them, the better.
Behind John’s austere façade, Sukey catches tantalizing glimpses of a lonely man with a gift for laughter. Yet her heart warns her not to fall for a man with one foot out the door, no matter how devastating his kiss.
Then he lands a butler job in town—but there’s a catch. His employer, the vicar, insists Toogood be respectably married. Against both their better judgments, he and Sukey come to an arrangement. But the knot is barely tied when Sukey realizes she underestimated just how vexing it can be to be married to the boss…

EXCERPT
Sukey Grimes, maid-of-all-work, gave the chipped mantel a last pass with her duster. Empty of furniture, the two attic rooms looked nearly a decent size. But on a rainy day likethis, nothing could hide the leak in the roof. The boards in the ceiling swelled and rotted,and water dripped into a cast-iron pot with a constant plip plip plip.
Someone knocked.
“Mrs. Dymond, is that you?” Sukey called. “I’ve been over these rooms, and if your sister happens to be missing a hairpin with a lovely rosette on it, I simply can’t imagine where it could have got to.” She pulled the pin from her hair and held it out as she opened the door.
It wasn’t Phoebe Dymond, former lodger in these rooms, or her new husband Nicholas Dymond either. It was a very tall, very well dressed, very—“handsome” wasn’t in it. Oh, he was handsome; there weren’t any bones to be made about that. But handsome was ten for a penny. This man had character. His jaw might have been hewn from oak, and his nose jutted forward, too large on someone else’s face but perfect on his. His warm, light-brown eyes stared right into her, or would have if he’d seemed the slightest bit interested in her.
He glanced down at the hairpin, lips thinning. His eyebrows drew together, one bumping slightly up at the side. The tiny, disapproving shift brought the deep lines of his face into sharp relief.
Oof. He as good as knocked the breath out of her, didn’t he? “I’m that sorry, sir, I thought you were somebody else.” She tucked the pin back into her hair with relief. Mrs. Dymond’s little sister had made the rosette from a scrap of red ribbon that showed to advantage in Sukey’s brown hair. “Are you here about the rooms for let? They come with a bed,” she said encouragingly, quite as if the mattress had been restuffed in the last half a decade.
The eyebrows went up together this time. “I am Mr. Toogood. Mr. Dymond’s valet.” The calm, quiet growl of his voice knocked the breath out of her too. Deep and powerful, it was made for loudness, even if he kept it leashed. Tamed, he probably thought, but Sukey didn’t think you could tame a voice like that, only starve it into temporary submission.
She wondered what Mr. Toogood would sound like tangled with a woman in that lumpy bed. Were bitten-off growls all he’d allow himself there as well? She’d never find out—she had never tangled herself up with any man yet, and never planned to—but it was nice to think about nevertheless.
Tardily, her brain caught up with her ears. “Not anymore, are you? Or you’d know not to look for him here.” She didn’t expect Mr. Dymond could afford a valet now he’d married beneath him.
Mr. Toogood didn’t flinch. If anything, he looked more calmly superior than before. “No, not anymore, that’s correct. Can you tell me where I might find the Dymonds?” That voice rubbed up and down her spine.
She made a show of considering. “I don’t know as I’d ought to tell you. How am I to be sure you are who you say you are?”
To her surprise, his lips twitched. He pulled a card out of his pocket. John Toogood, it read. Gentleman’s Gentleman. His own card! Upper servants were another species, right enough.
She pocketed the card to show the maid next door. “Oh, that don’t prove a thing. Anybody can have cards printed.”
His lips curved, the lines between his nose and the corners of his mouth deepening in a very pleasant way. “And anybody can sweep a floor thoroughly, but I don’t accuse you of doing it.”

Have you read Rose Lerner's books yet?

Do you enjoy stories about "ordinary" characters?

I'm giving away a Kindle copy of one of the first two Lively St. Lemeston books to a randomly chosen person who leaves a comment on today's post. Winner's choice of Sweet Disorder or True Pretenses. 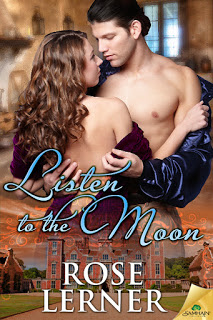 Pre-order Listen to the Moon