On Second Thought - - The Trouble With Joe 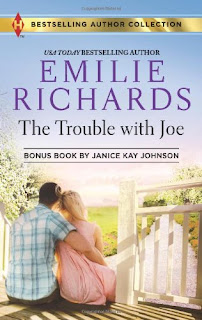 Samantha Whitehurst and Joe Giovanelli meet in a Georgetown restaurant on Sam’s twenty-first birthday. Sam is the well-bred daughter of well-bred, wealthy, emotionally distant parents; Joe is a waiter in the restaurant. He is warm and vital and outgoing, everything Sam’s parents are not. By the end of the meal, Joe has been fired, thanks to Sam’s banker father; by the end of the evening, he and Sam have fallen in love.

The two could hardly be more different. Sam is the only child of affluent parents, Protestant in religious affiliation, and shy and reserved in personality. Joe is a poor graduate student training to become a teacher, the second of seven children in a boisterous, loving Italian family, and a practicing Catholic. Joe has reservations about Sam being happy with the life he can give her. Sam has none, and Joe cannot resist her. And so they are married.

Four years later, they have settled in Foxcove, a small town in North Carolina, near Joe’s family. Their life should have been perfect. They are still deeply in love, they have jobs in which they take great satisfaction (Sam as a first-grade teacher and Joe as a high school principal), and they have almost finished renovating an old general store into their dream home, complete with a fort Joe built for the large family they planned. But instead of reveling in all they have, they can only watch as their marriage founders.

After three years of trying to have a baby and Sam’s having undergone every fertility test known, Joe reluctantly agrees to be tested. The results devastate him. With a low sperm count and an allergic reaction to his own sperm, Joe will never father a child. He responds to the shame, anger, and pain he feels by withdrawing. He refuses to consider adoption, and every glance at the woman he loves serves only to remind him of how he has failed her. Thus, he rejects her every overture. Soon Joe and Sam are not connecting physically or emotionally.

Into this explosive situation comes Corey Haskins, one of Sam’s students—a neglected, highly intelligent little girl with a chip on her shoulder as big as she is, a heart full of love for Sam, and a fear of “mean” Joe to which she refuses to surrender. Sam loves Corey dearly, and when Corey’s indifferent mother is killed in an automobile accident, Sam insists that she and Joe give her a home until the child’s father can be located. Joe reluctantly agrees, but he stipulates that Corey’s presence is a temporary placement. Over the next months, through a series of challenges and conflicts and moments of understanding, Corey captures Joe’s heart and shows him that there is more than one way to become a father.

The Trouble with Joe was first published as Silhouette Special Edition #873. It is one of my all-time favorite contemporary romances and one of my top ten category romances. It beautifully demonstrates that in the hands of a gifted writer a category romance can have the complexity of a single-title and provide the reader with a reading experience that lacks nothing in emotional satisfaction.

I’m a fan of the marriage-in-trouble trope, and this is one of the best. Richards uses flashbacks to show Sam and Joe from their first meeting, and the joy the reader sees between the two in scenes from their early life as a couple increases the reader’s investment in these characters and deepens the poignancy of the distance that grows between Sam and Joe later. The flashbacks also ensure that the reader sees Joe at his best, making it easier to remain sympathetic when his pain causes him to hurt others. While the greatest character growth is Joe’s, Sam also grows stronger and more assertive over the course of the story.

This is also Corey’s story. She is neither a pretty paper doll character whose only function is that of a plot device nor an adorable child who makes the reader melt. She is a troubled, flawed child and not a pretty one. She uses her intelligence to win battles, and she can strike with hurtful accuracy to send her message. But she is also needy and vulnerable and smart and stubborn and courageous. She is as fully dimensional as Sam and Joe.

Fertility stories are not uncommon in romance fiction, but they generally deal with the heroine’s inability to conceive. Too often for my taste, they end with some miraculous conception. The Trouble with Joe is rare on two counts: first, the infertility problem is the hero’s problem, and second, the hero’s dreams of fatherhood are just as central to the way he views himself as are any heroine’s dreams of motherhood and his inability to father a child biologically is just as heart shattering for him as any heroine’s response to her infertility.  And Richards offers her readers no miracle other than the one love works.

If you are a romance reader who thinks all categories are slight stories, I suggest you read this one and see how wrong you are. If you like your romance contemporary with real people facing real problems, I think you’ll like this one. If you love a story that grabs you with the opening scene and doesn’t let go until you sigh mistily over the final sentence of a terrific epilogue, I highly recommend this book. As an added incentive, if you purchase this digital edition, you’ll also get Someone Like Her by Janice Kay Johnson, another amazing category writer who gives her readers compelling, emotionally rich stories.