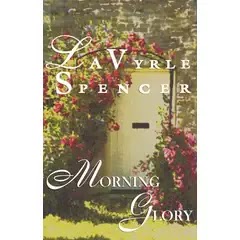 My keeper shelves include books from more than seventy small-town series, and they are just a fraction of those I have read. Moreover, I’m not counting standalone novels with small-town settings. Most of these small-town favorites have been published in the twenty-first century since this sub-genre has proliferated, but one of my most beloved, most frequently reread books with a small-town setting predates the trend. LaVyrle’s Spencer’s Morning Glory is widely considered a romance classic. It ranks high on my list of books every romance reader should read.

The year is 1941. The place is Whitney, Georgia, a small town far removed from the warm, fuzzy places romance readers often encounter. Elly Dinsmore, recently widowed with two small children and pregnant with her third child, desperately needs help on her farm. Isolated from the town by her illegitimacy and by her closed, shuttered upbringing at the hands of fanatical grandparents, she is known as “Crazy Elly” in town. Unsurprisingly, she works at avoiding contact with the people who scorn her. Elly is competent and determined, but even so she can’t take care of the farm alone. She needs a husband, and so she places an advertisement in the local paper: “WANTED—HUSBAND. Need healthy man of any age willing to work a spread and share the place. See E. Dinsmore, top of Rock Creek Road.”

Will Parker, a foundling, a drifter and an ex-convict recently released from Huntsville State Penitentiary (Alabama), has just been fired from his job at the Whitney sawmill, and he knows how slim his chance of finding another is. Three green apples and a quart of buttermilk, stolen, and $9.00 for three day’s work are all that stand between him and starvation. When he sees the unusual ad in the Help Wanted section, he is desperate enough to check it out. Thus, two lonely outcasts, a woman who has spent her whole life in Whitney but never belonged there and a man who doesn’t know where he was born and has called no place home, meet and eventually agree on a marriage of convenience.

Their marriage begins with minimal expectations on both sides, but it becomes more than either Elly or Will expect. But when World War II breaks out and Will joins the Marines, they must endure separation as Will serves in the South Pacific and Elly’s narrow world broadens to include two new friends. Will returns, a wounded war hero with a Purple Heart as evidence of his valor. Shortly afterwards, a local woman of dubious virtue is murdered and Will is charged with the crime. The reclusive Elly must conquer her own fears and fight to prove the innocence of the man she loves.

Lavyrle Spencer retired almost two decades ago, and younger romance readers may be unfamiliar with her work. However, during the 1980s and 90s, she was one of the most popular writers in the genre, earning best-seller status routinely. She was already a member of RWA’s Hall of Fame in 1990 when Morning Glory, her fifth Rita winner, was named Best Romance of 1989. It is one of the most enduring novels from the Golden Age of Romance, and more than a quarter of a century after its initial publication, it remains one of the books most often recommended to new readers as representative of the best the genre has to offer.

Spencer understood the power of revealing the extraordinary dimension in the lives of ordinary people. Elly and Will are not particularly good-looking, wealthy, educated, or talented. They have led deprived lives, have never felt a sense of community, and have a most humble sense of their own worth. While Elly loves her children deeply and has known a degree of happiness with her first husband, it is Will who sees who she is and values her for all he sees. For him, Elly and her children become the family he has always longed for and never had. Some of the novel’s most poignant moments occur as Will slowly realizes he has found his place and his people.

Spencer does a superb job of taking the reader into the inner worlds of both Elly and Will. There is a particularly lovely bedroom scene, one that gives new meaning to that term as defined by twenty-first century readers. With moving simplicity, Spencer juxtaposes the thoughts of her hero and heroine in poetic parallelism. Every syllable in the passage counts.

They lay flat, quivering inside, disciplining themselves into motionlessness. From the corner of her eye she glimpsed his bare chest, the looming elbows, the hands folded behind his head. From the corner of his eye he saw her pregnant girth and her high-buttoned nightie with the quilts covering her to the ribs. Beneath her hands she felt her own heartbeat driving up through the quilt. On the back of his skull he felt the accelerated rhythm of his pulse.
The minutes dragged on. Neither moved. Neither spoke. Both worried.
One kiss--is that so hard?
Just a kiss--please.
But what if she pushes you away?
What is there for a man in a woman so pregnant she can scarcely waddle?
What woman wants a man with so many tramps under his bridge?
What man wants to roll up against someone else’s baby?
But most of them were paid, Elly, all of them meaningless.
Yes, it’s Glendon’s baby, but he never made me feel like this.
I’m unworthy.
I’m undesirable.
I’m unlovable.
I’m lonely.
Turn to her, he thought.
Turn to him, she thought.

The secondary characters are also vivid and unforgettable. Although all of them are skillfully drawn, Miss Gladys Beasley, the town librarian, is especially memorable. Intelligent, respected, and tough-minded, she is also a wise woman who sees Will’s worth and becomes his friend and mentor. She too becomes a part of Will’s family and is instrumental in seeing that he and Elly become part of the community. Some of the scenes between Will and Miss Beasley are as tender and moving as the love scenes between him and Elly.

This novel has a rare sweetness—not in any sappy, saccharine sense, but in the sense that “sweet” was used in earlier times to mean untainted, sound, and wholesome. It is one of those books that I love more each time I read it. I give it my highest recommendation.