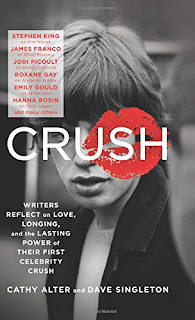 In their introduction to this collection of essays about celebrity crushes, Alter and Singleton claim that “Celebrity crushes change and mold us into the people we will become, shaping our ideals, fueling our fantasies, aiding and abetting our conquests, and leading us to (or away from) the people we meet and fall in love with decades later.” The thirty-eight essays that follow this claim offer persuasive proof of its validity. The authors who share their memories on the subject are a diverse group in terms of age, race, sexual orientation, level of fame, and experience, but they share a certain nostalgic point of view as they recount—some humorously and some poignantly—their first celebrity crushes. The crushes range from movie stars, rock stars, and teen idols to fictional characters from novels and television and animated figures. Perhaps more surprisingly, they also range from the predictable (Donny Osmond, David Cassidy, and Paul Newman) to the unexpected (Annie Potts, Kareem Abdul-Jabbar, and River Phoenix).

The essays I found most interesting include Jodi Picoult’s account of running away to live with Donny Osmond, a pillowcase bearing her crush’s image in her six-year-old hand; two essays, one by by Roxanna Gay and the other by Joanna Rakoff, about Laura Ingalls Wilder’s hero, Almanzo Wilder; James Franco’s consideration, complete with poems, of the influence of River Phoenix; and Yesha Callahan’s “My Own Private Danny Zuko,” which is as much about racism and its effects on the young as it is about a teen’s crush on Danny Zuko/John Travolta. Callahan’s is just one of the essays in which character and actor meld in the crushee’s consciousness.

I also found it interesting that several of the women essayists acknowledge their mother’s supporting role in the course of the crush. On a personal note, I enjoyed Picoult’s mention of her mother’s crush on Paul Anka, and with each mention of Donny Osmond’s “Puppy Love,” I longed for a footnote acknowledging that Anka, who wrote the song, was melting tween and teen hearts with his hit more than a decade before the Osmond version. The tributes to Almanzo made me think of made me think of my friend Fran (aka MsHellion), another major Almanzo fan, and of my own first literary crush, Gilbert Blythe in Lucy Maud Montgomery’s Anne Shirley books.

The success of this book lies in large part with its appeal to an experience shared by its readers. Who among us cannot recall that first celebrity crush? I’m confident that I’m not the only reader for whom Julia Pierpont’s observation “First comes crush, then comes commerce” will call forth recollections of a lunchbox, a tee shirt, or a poster. For me, it was an illuminated, full-color framed photograph and nightlight that was included with Paul Anka Sings for Young Lovers. The collection becomes more than nostalgic entertainment with such astute comments as Picoult’s statement “I knew nothing about who the object of my affection was in his real life. He was, purely and simply, what I needed him to be in mine” or Michelle Brafman’s description of her long-term connection with Harry Chapin and his music as not a romantic crush but rather “one of the soul.”

This is not the usual TRD book review, but even though Crush is not romance or women’s fiction—or even fiction at all—it is a book I think many of you will enjoy immensely. I also suspect that I will not be alone in its awakening a longing for a romance author version. I’m sure Teresa Medeiros could write a great essay on her Donny Osmond crush.