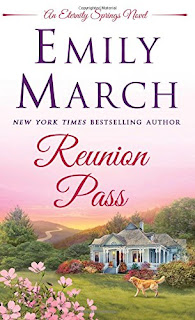 Lori Reese and Chase Timberlake were once the favorite young lovers of Eternity Springs, but the differences between grounded, responsible Lori, serious about maintaining the grades that would assure her admission to veterinarian school, and intrepid Chase, whose passion for outdoor photography allowed him to satisfy his wanderlust, proved too great. They did not so much break up as fade out. Years later, their separate dreams are coming true. Lori, who has taken her father’s name and is now Lori Murphy, is graduating from vet school, and Chase travels the world as part of the crew of Thrillseekers, Inc., an adventure reality show. He is also engaged to the show’s star, a former Olympic athlete who shares his thirst for adventure. A late night conversation gives Chase and Lori an opportunity to admit each had wondered what if at times but to recognize they have moved on with their lives.  Lori sums up their status:

“We are Chase and Lori who needed something from each other that we weren’t able to give and remain true to ourselves. That doesn’t make one of us right and the other wrong. It’s that we weren’t right for each other.”

But things are not so simple. When Chase goes missing during a Thrillseekers trip to Chizickstan (a fictional country bordering Afghanistan), Lori’s grief and fear are not the reactions of an old friend. She is devastated. She rejoices along with Chase’s family and the rest of the Eternity Springs community when Chase is found safe, but it soon becomes clear that the Chase who returned is far more damaged than anyone realized even though his wounds are not visible. It is Lori who finds a way to provoke Chase into taking cautious steps back into the land of the living. The love that neither has ever fully forgotten is reawakened as Lori proves herself a staunch and perceptive friend, but is their love strong enough to overcome the obstacles that could separate them?

Reunion Pass is the eleventh book in March’s Eternity Springs series. Fans of the series who have watched Lori and Chase since they were teenagers will be delighted by the story, but this richly emotional reunion romance should appeal to any reader who enjoys small-town contemporary romance. Chase and Lori’s journey back to each other makes for a compelling read, and once again Eternity Springs demonstrates why it has the reputation of healing wounded hearts and inspiring the fearful to live with courage. Fans of the series will enjoy seeing old friends, particularly Chase’s parents, Ali and Mac Timberlake (Heartache Falls, Eternity Springs #3), and Lori’s parents, Sarah and Cam Murphy (Lover’s Leap, Eternity Springs #4). Of course, the wise and wonderful Celeste Blessing is present, and March even makes Chase’s fiancée a credible—and ultimately sympathetic—character. Reading this book made me long for time to reread the full series.

I highly recommend Reunion Pass. Chase and Lori’s story can be read as a standalone, but don’t be surprised if after reading it, you find yourself joining readers waiting impatiently for a return trip to Eternity Springs. I’ve been a fan of the series since the first book (and of Emily March, aka Geralyn Dawson, much longer), and my enthusiasm is undiminished as the series approaches a dozen books. FYI, that twelfth book, Christmas in Eternity Springs, will be released October 4.
I am waiting—impatiently.