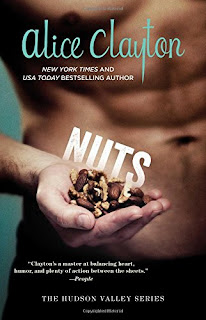 Roxie Callahan has just lost her job as a private chef in Hollywood so when her hippie mother calls asking her to come back to her childhood home to help run the family diner, Roxie is none too thrilled but does so anyway.   What can one summer hurt?   She found the mettle to leave Bailey Falls before so she won’t let home suck her back in permanently this time.

But then Roxie meets Leo Maxwell of the New York Maxwells—that aloof, rich family who own the mansion down the road to which most locals like Roxie were never invited.   But this Maxwell is farming the land and bringing her walnuts.  He’s warm and engaging.   And hot.  Roxie comes to find out Leo is deeply involved in the slow-food movement and with his ingredients, she could actually make something special in the diner—something besides the meatloaf that’s been on the menu forever.
And maybe Roxie might be able to make something else special with Leo… something that could make her see herself in Bailey Falls for just a while longer.
Sigh.   How do I say this?  Alice Clayton can write.  But there is an unwritten contract between romance writer and reader in which the writer makes the effort to create something that will take the reader to another place, and said reader plunks down the money necessary to experience that escape.   That’s the deal.
NUTS hinted I’d be whisked away but could never quite deliver because the writer kept inserting herself into the story.  When I wanted to get lost in Roxie and Leo, all I could see was Clayton.

Here’s an example:
“Tonight, I was having Leo.  Over for dinner.  Yes, that period was intentional.”
So now I’m aware of Clayton writing the book, which made me aware of my reading it as opposed to the illusion of living through this relationship alongside the hero and heroine.  And Roxie isn’t writing (though the book is from her POV).  Roxie is a chef.  This breaking-the-fourth-wall business might be a fun one-time tool were NUTS not riddled with it.   And it may be Clayton’s thing, but I found it more disruptive than amusing as every instance yanked me clear out of the story.  Exhausting.  I could sense the author writing, which lead me to feel her as EVERY character when I only want to know her as the distant omniscient creator of said characters.  Otherwise I’m robbed of the experience of getting lost in Roxie and Leo's relationship.

Otherwise, the writer has broken that romance writer/reader contract I mentioned.
As for the chemistry between hero and heroine, Roxie used to be shy but has learned to assert herself, probably stemming from the bravery it took to leave her hometown in the first place.   So now Roxie is an aggressive flirt—using painfully obvious innuendo when speaking to Leo, throwing herself at him, and sitting in his lap when it’s too soon in the relationship for any self-respecting woman to do so.   Such behavior whittled away the potential for some really great sexual tension between them.  Roxie actually embarrasses me she’s so available to Leo, which made their interplay a tad tiresome because there was no chase.   In addition, Roxie engages in this rapid fire banter that is very difficult for me to buy from someone who was once so painfully shy.
The other issue I have is with the obstacles.  Every romance has obstacles, but Clayton’s are of the saved-by-the bell variety.  Literally.   When Roxie and Leo are about to have sex, the ill-timed phone rings.  Another time, a bee flies into her bra.   It’s these silly external obstacles as opposed to some internal, psychological one--or a more serious external one--which frustrate me, in part, because I know Clayton has talent.   There are sublime paragraphs—sections I highlighted so I could go back and reread them.  That’s why I gave her three stars, which, on the Dish, is “satisfying” as opposed to a two star “not my cup of tea.”

Perhaps this is why I’m reacting so strongly to the book.   I feel as though Clayton clearly has the potential to take me and every other reader away but through misguided author choices, falls short.
Is NUTS a good romp?   It could have been.  It promised to be.   But it wasn’t for me.