Weekend Reviews: Good Dukes Wear Black and Heart Like Mine 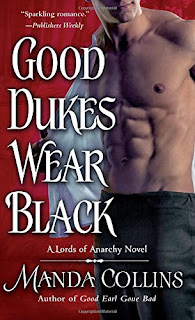 In this third Lords of Anarchy book, Ophelia Dauntry is enraged when, during a shopping trip at a hat shop, her friend and fellow writer for the Ladies’ Gazette, Maggie Grayson, is shackled and carted off to an asylum for the insane by two men brandishing a writ for the action purportedly signed by Maggie’s husband. Ophelia does her best to prevent the men from taking Maggie, but she is no match for their superior physical strength. Indeed, she is injured in her valiant attempt to thwart them.

Ophelia immediately suspects that the Lords of Anarchy are involved in Maggie’s kidnapping and sets out to seek the assistance of Piers Hamilton, Duke of Trent, and the new president of the infamous driving club. Ophelia arouses Trent’s protective instincts, but he quickly learns she is no passive miss in search of a dragon slayer. She is direct in stating her expectations: “I do not expect you to fight my battles for me. I simply wished for your assistance. There is a difference, you know.”  The two will confront danger from unexpected sources as they work together to rescue Maggie and lose their hearts to one another in the process.

Once again Manda Collins gives her readers a tale perfectly balanced between romance and mystery. Ophelia is an intelligent, strong-willed heroine who rejects the role of helpless maiden without appearing to be a thoroughly modern miss in historical dress. Trent is a practically perfect hero who combines appropriate dukely powers with a soldier’s strengths and a lover’s ardor. I adored both characters. The mystery with its unexpected twists keeps the reader intrigued but never detracts from the relationship between Ophelia and Trent.

In her third historical series, Collins proves that she can offer character-driven suspense and historically accurate contexts with a grace and skill that earn her a place among the genre’s best writers. I highly recommend Good Dukes Wear Black. Although it is the final book in this excellent trilogy, Ophelia and Trent’s story stands quite well on its own. 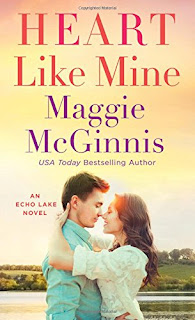 Mercy Hospital is facing tough times economically, and Delaney Blair, a hospital administrator who is hoping to be named CFO when her boss retires, is given the task of recommending major cuts in the pediatrics department—and she has a mere thirty days in which to complete her task. When all attempts to contact the head of the department for a meeting fail, Delaney reluctantly heads for pediatrics to beard the doctor in his department. Only Megan, Delaney’s assistant and friend, knows why the very thought of visiting pediatrics is enough to send Delaney into a panic attack.
Dr. Joshua Mackenzie has no time or patience to spend on the people from the business office. He is too busy meeting the needs of his pediatric patients with resources that never seem to be sufficient. When Delaney appears in his department, he ignores the tug of attraction and challenges her to spend time on the floor to find the “fluff” she is convinced is there. He insists that she can render a fair judgment only if she “mucks right in.”
The days that follow are a life-changing experience for both Delaney and Josh. Not only do their initial impressions of one another undergo radical change, but each learns a vital lesson about faults in the way they have shaped their lives. But can these two wounded people who have found salvation in their work take a risk and trust their vulnerable hearts?
I was a fan of small-town romance long before the current trend and continue to rank some small-town series among all-time favorite romances. But honestly, have recently read so many mediocre books in this subgenre that I am wary of adding new series. I did read (and review for TRD) Forever This Time, the first book in McGinnis’s Echo Lake series, but a secondary character I loathed made it a disappointing experience. However, in the final paragraph of that review I wrote, “I did like Ethan’s friend Dr. Josh and look forward to his story, Heart Like Mine, set for release on April 5, 2016.”

Fortunately, the secondary character I disliked plays a lesser role in the second novel, and I liked Heart Like Mine much better. First, it is rooted in a situation that many small hospitals are facing in real life. Second, the world of the hospital is filled with interesting, generally sympathetic characters. Most significantly, Delaney and Josh are richly developed characters who are engaging from the first and who grow during the course of the story. The conflicts between them emerge naturally from who they are and never seem contrived. If you enjoy small-town romance, I urge you to give Heart Like Mine a try. I’m betting you fall for Delaney and Dr. Josh too.
~Janga