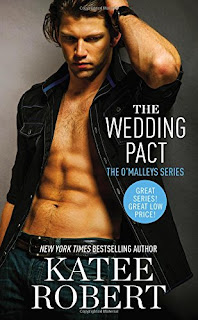 The Wedding Pact by Katee Robert is the second book in her latest series The O’Malleys. They  are a tight knit family but not in cheerful, loving way. Power is everything and they exude on all levels. They have issues and they have enemies. James Halloran’s family happens to be one of  them. Too bad for Carrigan O’Malley because she’s got it bad for James and that ain’t good.

You would think that this Romeo and Juliet couple would be as doomed as the two young lovers were in Shakespeare’s classic troupe of wrong boy meets wrong girl. But Carrigan and James  are different. They are clay pots fired in the kilns nursed by their over the top insane, ruthless,  power mad patriarches of their families. This had forged in them both keen survival skills and  bold determination to go after what they feel is rightfully theirs.

Their relationship started off in non too pleasant circumstances in the first book of this series. However, it lit within them the knowledge that they belong to one another. Undeniably so. Once they accept their fate, they will stop at nothing to achieve that goal.

So they defy their fathers. Carrigan must escape an archaically arranged marriage to a rival  Russian mob family. This introduces a nastily  controlling villain and his not very stellar family but  there is more where that came from in the following book in this series.

In the end, they create their own happily ever after. Separating themselves from their overbearing and overwhelming families to forge a dynasty of their own. You kinda want to cheer them on and  you really should. The Wedding Pact was a good story. For the most part, I liked the characters  as they were presented. The siblings on both sides are strong and I found myself wondering  about their stories and hoping they also escape the ties that bind them. I would have liked to  know more about what made their families sworn enemies and so devastatingly so in this day in  age in Boston. The Halloran and O’Malley families are not Nob Hill Bostonites but you can sense the grit of their Southie roots.