Review - - At the Edge and Edge of Surrender 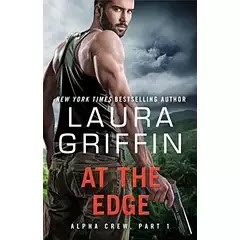 I’m always a little uneasy when a favorite author decides to stretch her wings a bit and try something new. Don’t get me wrong, I understand that need for change, but there’s always a bit of fear on my part when I try the new stuff for the first time. Will it be as good as her other books that I’ve loved? Or will it be a total disaster? In the case of Laura Griffin’s new military romance series, Alpha Crew, I had nothing to worry about.

Known primarily for her long running Tracer’s series, Laura Griffin’s Alpha Crew series isn’t such a departure for her as it would first appear. She’s featured Navy Seal heroes in two of her Tracer’s books and the Alpha Crew is a super-elite, secret offshoot from the Seals. In this two-part introduction to the new series, we’re introduced to Alpha Crew leader Ryan Owen, who is sent along with a few of his men, into the Philippine jungle to find out what made the small plane of the wife of the US Ambassador to the Philippines crash. Much to his surprise, there’s a survivor, Emma Wright, who is convinced that the crash was no accident.

There’s an immediate connection between Ryan and Emma, and they’re both convinced at first that it’s because they’ve gone through something harrowing together. And when Emma shows up in Ryan’s favorite San Diego watering hole months after the crash, despite the very real sparks between them, he is determined to keep his distance so he doesn’t take advantage of her. But when he sees her almost run down in the street, his protective instincts take over and when Emma explains her reasons for being in San Diego—so that she can report what she’s remembered from the plane crash, that there was an explosion, to the FBI—he’s convinced that someone wants to silence her before she can do what she came to do. 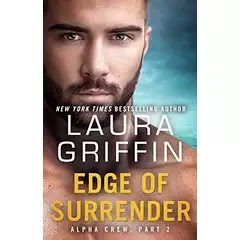 What follows is a sexy, roller coaster of a story, complete with a safehouse seduction, kidnapping attempts, days on the run, and more explosions. If you were one of those readers who feared Laura Griffin’s change in direction would mean a lack of thrills, let me assure you that’s not the case. While together, At the Edge and Edge of Surrender are shorter than your average Laura Griffin novel, there is more than enough excitement, danger and romance here to satisfy the romantic suspense lover’s heart. There also seems to be a hint at what the first full length Alpha Crew novel will entail, and let’s just say it looks plenty intriguing.

I waited to review these until they were both out, because like many readers, I HATE cliffhangers. Together, however, At the Edge and Edge of Surrender are a fun and sexy read. If you’ve been wanting to try Laura Griffin, this would be an excellent place to start.