Review - - The Study of Seduction 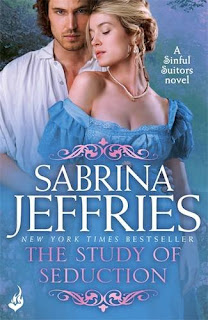 On the surface, Lady Clarissa Lindsey and Edwin Barlow, the Earl of Blakeborough are as mismatched a pair as one could imagine. However, there's more to these two than the personae each presents to society. Lady Clarissa may be the life of every party but beneath her vibrant, carefree exterior lurks a dark and painful secret that changed the course of her life and that of someone very close to her. Shame and guilt guide many of her life decisions and though she harmlessly flirts and exchanges witty banter with the gentlemen who admire her, she has sworn to never marry. Edwin Barlow, her best friend's older brother, is one of the few men she truly trusts but not even Edwin could change Clarissa's mind about marriage. Or could he?

A blunt-speaking man who lives by a strict code of ethics, Edwin's personality was molded by events in his childhood. Viewed as stuffy by some, dull by others, Edwin is actually far from either. His actions are driven by his need to keep those for whom he cares safe, including Clarissa who has always fallen under Edwin's wing by virtue of her close friendship with his sister and Edwin's close friendship with Clarissa's cousin and guardian, Warren Corry, the Marquess of Knightford. When Warren is called to the continent, he asks Edwin to escort Clarissa and her mother to events in London. A certain French diplomat has become too determined in his pursuit of Clarissa and Warren worries for her safety. He knows Edwin will guard Clarissa as he would his own sister.

Having resigned himself to the fact that it's time to choose a wife, Edwin, who is ill at ease talking with most women, views Warren's request as something of a gift in that he will watch over Clarissa and she can help him choose a calm and quiet wife who will leave him to his mechanical endeavors while she tends the house and children. In other words, someone the exact opposite of Clarissa. You have to know that isn't going to go according to plan...for either of them!

I've been a fan of Sabrina Jeffries' work for many years and many of her books have spaces on my keeper shelves but even among the keepers, The Study of Seduction holds a special place. This poignant, suspenseful, and sensual story touched my heart and kept me entertained from beginning to end. Edwin are Clarissa are one of my favorite Jeffries couples. They were both deeply affected by violent events in their pasts that had a significant role in shaping who they became as adults. I appreciated Jeffries' deft handling of these events, in particular, Clarissa's and especially, Edwin's actions as he begins to suspect the truth and his reaction to her ultimate revelation. He catapulted straight to "favored hero" status! The depth Jeffries brought to their relationship, allowing them the time to gradually deepen their friendship and trust of one another, and slowly, carefully discover the desire that sizzled between them through kisses and simple touches before taking them to the next step was delicately handled and deeply appreciated by this reader. And let me add that this author really knows how to develop a sinister villain!

The Study of Seduction now rests on my keeper shelf where I have no doubt it will be revisited from time to time. Edwin and Clarissa's story is too good to wish them a permanent farewell. In the meantime, I'll turn my attention to the next Sabrina Jeffries book on the horizon. The Danger of Desire, Warren's story, will be released October 18, 2016. I can hardly wait!