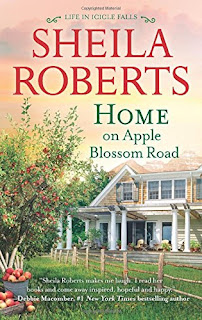 The death of his beloved grandmother brings Colin Wright home to Icicle Falls, although he expects to return to Seattle and his warehouse job and girlfriend there shortly after the funeral. His plans are thwarted when his grandmother’s will is read. She has left him joint ownership in a “treasure” for which he must search according to the rules specified by the will. He can search only with his co-beneficiary, he is allowed no other help, and he must be free of any romantic commitments such as engagement or marriage. The search is modeled after treasure hunts his grandmother and aunt planned for him and his best friend from childhood. That friend is his co-beneficiary. The problem is that she is also a former girlfriend, the one who broke his heart. They last saw each other eight years ago, and that meeting was anything but amicable.

Justine Wright may not have been Mia Blair’s grandmother by blood, but that is the role she had filled in Mia’s life, particularly after the death of Mia’s mother when Justine’s daughter Beth became Mia’s foster mother. Mia’s grief is as real as Colin’s, and she refuses to allow him to make her feel out of place. She is as unprepared as he is for Grandma Justine’s will. Still, although the idea of her and Colin joining forces to find treasure as they did as children may seem ridiculous, she can’t ignore her grandmother’s wishes or allow Colin to think she is intimidated by the idea of working with him. Her job may be in Chicago, but Mia is beginning to suspect her heart will always be in Icicle Falls.

As Mia and Colin conduct their treasure hunt, with most of Icicle Falls looking on indulgently and some offering Grandma Justine’s prepared clues, the feelings they have spent nearly a decade trying to bury resurface. They still have obstacles to overcome, but if they just persevere, they might find a greater treasure than the one that set them on this hunt. They—and the reader—know that greater treasure is the one Grandma Justine had in mind for them all along.

Home on Apple Blossom Road is a reunion story (my favorite trope) with a generous serving of sweetness and a bit of poignancy. Colin and Mia’s bond is an almost lifelong one that encompasses cherished memories and three generations of intertwined lives. The misunderstanding that separated them for years has stretched but not broken that bond. Just the hint of misunderstanding that could have been cleared up with some honest communication is usually enough to leave me ready to close the book, but Colin and Mia’s youth, his history with an absent mother, and her insecurities increased the credibility and decreased the plot device effect of their breakup. I really liked these characters and wanted to see them reunited.
The eulogies for Grandma Justine made me fear the posthumous influence of a too-saintly-to-be-true grandmother, but later recollections of her and the excerpts from her letters that introduce chapters make her endearingly human. Her age and the fact that she has enjoyed a life well lived keep the funeral scene that opens the book from casting a pall over the story. Icicle Falls is a lovely place to visit, and this ninth book in the series is an engaging novel, one of the best of the series. If you like your romance heartwarming and humorous, I recommend you add Home on Apple Blossom Road to your TBR list.