Review - - When You Touch Me 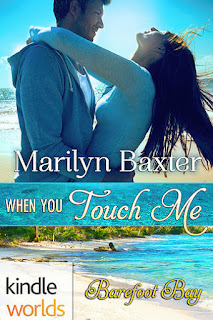 Jillian Logan loved the years she spent in Arizona, honing her skills in massage therapy and alternative healing. She has a real gift and hopes to open a business of her own where she can make a difference in people's lives. Family responsibilities following her mother's death have brought her home to Florida where there are fences to mend with her younger sister and decisions to be made regarding the family business before Jillian is able to pursue her own dreams. She's recently accepted a job in the spa at the Casa Blanca resort where, as Baxter puts it, "The good fortune gods had cracked open the skies and poured sunshine and rainbows all around Jillian Logan." The good fortune has a name: Sam Hartman. He's her new client, an injured soldier she's sure she can help if only she can get him to stop hitting on her long enough to focus what she can do for him...out of bed!

Sam Hartman is at a crossroads. Seriously injured in Afghanistan, he's out of the military with no idea of what is ahead. The wealthy mother of the soldier whose life he saved has gifted him ten days at Barefoot Bay's exclusive spa. He's envisioning good booze and hot women. What he gets is a gorgeous, no-nonsense massage therapist who is forcing him to face the fact that his wounds are more than skin deep. Sam's not ready to admit that he's suffering from PTSD or that Jillian may be able to help him heal. Yes, her massages are beginning to reduce his pain but he'd rather coax her into his bed and lose himself in sex than open himself to her "voodoo" methods of therapy. It's a classic battle of wills with both of their futures on the line.

When You Touch Me is a well-constructed story of healing and hope set within the Kindle World of Roxanne St. Claire's Barefoot Bay. Baxter's characters are multi-layered and fully developed, with real-life issues to which I had no difficulty relating. And it's clear the author has done her research regarding PTSD and the issues facing soldiers returning from duty in the Middle East. Fans of St. Claire's Barefoot Bay series will enjoy cameos by some of her characters, especially Jamaican dynamo and Casa Blanca housekeeper Poppy, though readers new to the setting will lose nothing by not having read St. Claire's books first. When You Touch Me flows well, eliciting both laughter and tears, and left me with "full book" satisfaction even though it is a novella of only 117 pages. The secondary characters add to the richness of the story without detracting focus from the main characters and I'd love to see more of them. I'm especially intrigued by Jillian's sister and also by Sam's brother. I'm hoping Marilyn Baxter has plans to write more stories set within the Barefoot Bay Kindle World. I can't be the only one who wants to read them!