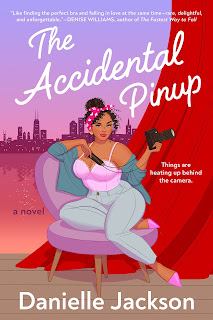 Photographer Cassie Harris loves her job—her company Buxom Boudoir makes people look beautiful and feel empowered with her modern twist on classic pinup photography. Cassie’s best friend, Dana, is about to launch her own dangerously dreamy lingerie line and wants Cassie to shoot and direct the career-changing national campaign. But company politics and Dana’s complicated pregnancy interfere, and Cassie finds herself—a proud plus size Black woman—not behind the camera but in front of it.

Though she’s never modeled herself, Cassie’s pretty sure she can handle the sheer underwear and caution tape bralettes. She’s not sure she can work so intimately with the chosen photographer, her long-time competitor in the Chicago photography scene, Reid Montgomery. Their chemistry is undeniable on set, however, and feelings can develop faster than film…

A glamorous career, body positivity for all sizes and shapes, and a happily ever after? Sign me up. This book is well-paced with a smooth writing style that will have you eagerly turning pages to see what happens next. The secondary characters–of which there are many–are diverse and add to the story. (I was particularly fond of Cassie’s mom, and also the assistant named Sam.) I was looking forward to reading more about them in subsequent books, but I felt that the author tied up the loose ends for these characters quite well. The heroine, Cassie, is everything you want in a heroine: hard-working, willing to go out of her comfort zone, and willing to say the hard things (even to her parents) but in a way that is respectful to both herself and the other person. Reid is also a good guy, but did seem to be the character with the most growth of the book. He’s not a jerk (no alpha moves here) but he did have a lot to learn at times, which made me struggle at times not to want to strangle him.

Cassie and Reid have polar opposite experiences when it comes to family life: her family is supportive (though of course, always want more for their daughter), financially secure, and happy; his family is dysfunctional, toxic, and avoided at all costs, which leaves him dealing with a younger brother that he feels he has to bail out once too often. While Reid’s reasonings for how he behaves toward his brother–and his reasons for agreeing to “spy” on Cassie for the LL company (the company they are working for) in order to get a bit more money to pay for his shiftless brother are understandable, this reader seriously wanted to send him to diversity and inclusion school, because he seemed to be completely unaware of his white privilege or the reasons why LL were giving Cassie a hard time and unwilling to allow her full reign over the campaign.

There are a few very notable scenes between Cassie and Reid where Cassie (once again) is basically having to have a “teachable” moment with Reid about his behavior or how the world works if you’re not a white male. There was literally a conversation about Reid talking about how hard he worked at his craft–that his promotions were all based on his work and nothing else–and I just wanted to scream. And that conversation where he said she didn’t have to be professional all the time–oh, man–that was an eye opener for him. Cassie handled him much more graciously than I ever would have. There are moments where she wonders if this is the kind of relationship she wants to have, where she is always the moral compass of the pair, and I could not blame her. I have not read a lot of romances where this dynamic plays out (where one has white privilege and the other doesn’t), nor how couples navigate it in order to have a successful relationship–but I think the author did an admirable job of making the ending work, where you felt this couple could be together.

There are also things that Reid does to draw Cassie out, to make her pursue some of her art for art’s sake, which makes her a better person in the end as well. It’s not one-sided–it’s just, I think she has the bigger end of the stick. They both grow and have better and healthier boundaries with their families in the end, which is key, and I enjoyed that as well. The Grovel Scene is pretty darned good (the sort of thing that would work for me); and the epilogue is hilarious. I cannot wait to see what else Danielle Jackson has in store for my reading pleasure.