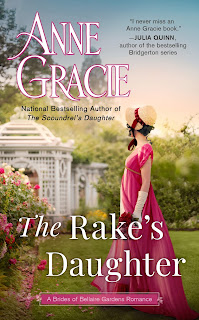 Recently returned to England, Leo, the new Earl of Salcott, discovers he's been thrust into the role of guardian to an heiress, the daughter of a notorious rake. Even worse, his wealthy ward has brought her half-sister, the beautiful but penniless Isobel, with her. Leo must find Clarissa a suitable husband, but her illegitimate half sister, Izzy, is quite another matter. Her lowly birth makes her quite unacceptable in London’s aristocratic circles.

However, the girls are devoted to each other and despite the risk of scandal if Izzy’s parentage is discovered, they refuse to be separated. To Leo’s frustration, nothing will convince them otherwise. Even worse, sparks fly every time Leo and Izzy interact. Called away to his country estate, Leo instructs the young ladies to stay quietly at home. But when he returns, he's infuriated to discover that Izzy and Clarissa have launched themselves into society — with tremendous success! There's no going back. Now Leo must enter society to protect Clarissa from fortune hunters, and try not to be driven mad by the sharp-witted, rebellious, and intoxicating Izzy.

PJ's Thoughts:
Witty banter, engaging characters, an adversaries-to-lovers romance, and two sisters who outwit our hero at every turn make this Regency romance a delight.
I adored Izzy and Clarissa. It was so heartening to watch the bond developed as children - when illegitimate Izzy was dumped on their father's doorstep following her mother's death - grow stronger as they became young women. I loved that while each woman was unique, and very different from the other, they were also equally devoted to and protective of one another. I want to see more of them and am hoping Gracie decides to write a book for Clarissa. She deserves her own happily ever after!
Leo took some warming up to, with his class-conscious beliefs, but he came around nicely in the end. Even though his behavior was consistent with the times, it did not initially endear him to me. He'd obviously never encountered anyone like Izzy - or Clarissa - before which made their encounters so much fun to observe. Izzy challenged him at every opportunity, managing to turn pretty much everything he believed on its head. Adding in the sizzling, and unwelcome, chemistry between them left him all the more confused, and frustrated, which, of course, made his and Izzy's journey all the more enjoyable for me, the reader.
Fans of Gracie will undoubtedly enjoy guest appearances by some favorite characters from other books. But there are also new characters introduced who comprise a somewhat quirky and entertaining secondary cast. I especially enjoyed Leo's reclusive aunt, Lady Scattergood, his majordomo, Matteo, and his best friend, Lord Randall. I do hope we'll be seeing more of all of them in a future book.
This is the second book in a series. There are some appearances by characters from book one but The Rake's Daughter can absolutely be enjoyed on its own if you choose to begin here.
~~~~~~~
Have you read any Anne Gracie books?
Do you enjoy cross-class romances?
One person who comments before 11:00 PM, August 2 will receive a print copy of The Rake's Daughter.
*U.S. only
*Must be 18
*Void where prohibited