Review & Giveaway - - The Hellion and the Hero

The Hellion and the Hero
by Emily Sullivan
A League of Scoundrels - Book 3
Publisher: Forever
Release Date: August 23, 2022
Reviewed by PJ 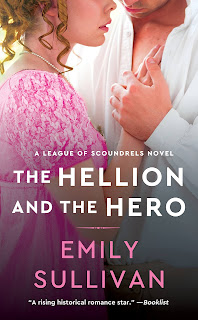 Lady Georgiana Arlington has always done what’s best for her family—even when it meant marrying a man she didn't love to save her father. Her husband’s death has left her stronger and bolder—a hellion, some would even say. When a mysterious enemy jeopardizes her livelihood and reputation, there’s only one person she can trust to help her uncover the threat: the same man she left heartbroken years ago.Captain Henry Harris is no longer the penniless fortune hunter he was when they first met. Now a decorated naval hero, he could have his choice of women, but no other woman has Georgie’s allure, nor the tenacity he can’t help but admire. Assisting Lady Arlington will put both his body and his heart in danger—and yet, he can’t resist a second chance with the one woman he’s never been able to forget.
PJ's Thoughts:
A widow, ready to live life on her own terms following the end of a controlling marriage of duty. A former naval officer/spy, burdened by PTSD and the guilt of living a lie. A second chance to claim the kind of love neither thought was meant for them. Is it any wonder I devoured this book like a warm cookie straight from the oven?
Emily Sullivan continues to reel me in with her intriguing plots, relatable characters, well-crafted suspense, and heart-tugging - and sizzling - romance. Georgiana and Henry are both complex, well-developed characters who engaged me both emotionally and intellectually. I love how Sullivan's heroines are of their time but still pushing against their societal boundaries. I couldn't help but cheer for Georgiana to best those determined to stop her efforts to change England's employment landscape.
My heart ached for Henry and all that he had endured. He's a caring man, uncomfortable with his celebrity, who captured my heart. I was with Georgie and Henry every step of the way as they navigated the initial awkwardness of their reunion, along with the long-held bitterness and mistrust between them - feelings that slowly gave way to rekindled attraction, understanding, forgiveness, and more. The "more" including amorous moments in both a carriage and a bathtub. Color me exquisitely satisfied!
With a slow-burn, sensual romance, a mystery that kept me guessing right up to the reveal, a richly-depicted secondary cast that helped move the story forward, and a hard-won happily ever after, Emily Sullivan's The Hellion and the Hero kept me happily engaged from beginning to end. This book stands well on its own but for an added layer of understanding of the main couple I recommend reading book two, The Rebel and the Rake first.
Have you read Emily Sullivan yet?
Do you enjoy historical heroines who push boundaries?
It has to be uncomfortable in real life but, I admit it, I'm a pushover for a good carriage love scene. What's your love scene catnip?
One randomly chosen person posting a comment before 11:00 PM, September 1 will receive print copies of The Rebel and the Rake and The Hellion and the Hero.
*U.S. only
*Must be 18
*Void where prohibited
Posted by pjpuppymom at 3:30 AM