Review - - For the Love of the Bard

For the Love of the Bard
by Jessica Martin
A Bard's Best Romance -  Book 1
Publisher: Berkley
Release Date: June 28, 2022
Reviewed by Hellie 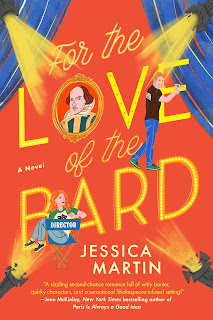 Literary agent and writer Miranda Barnes rolls into her hometown of Bard’s Rest with one goal in mind: to spend the summer finally finishing her YA novel, the next installment in her bestselling fantasy series. Yet Miranda’s mother, deep in the planning stages for the centennial of the town’s beloved annual Shakespeare festival, has other ideas.

Before you can say “all’s fair in love and war,” Miranda is cornered into directing Twelfth Night—while simultaneously scrambling to finish her book, navigating a family health scare, and doing her best to avoid the guy who broke her heart on prom night.

When it comes to Adam, the veterinarian with a talent for set design and an infuriating knack for winning over Miranda’s dog, the lady doth protest too much. As any Shakespeare lovers knows, the course of true love never did run smooth, and soon Miranda realizes she’ll have to decide whether to trust Adam with her heart again.

You know how I raved about A PROPOSAL THEY CAN’T REFUSE, how it was the MUST READ of Summer 2022? Well, your TBR pile just got a little longer. This book gives APTCR a run for your money in the Laugh Out Loud column because I don’t think there was a single page I wasn’t guffawing and reading tidbits to whoever was in the room at the time.

The set up is a classic “enemies to lovers” and “second chances” mish mash, complete with previous unresolved high school trauma that only an older sister kissing your boyfriend can create. One of the first lines in which I knew I would be placing this book on a keeper shelf and then buying whatever this author puts out next was this: “It wasn’t that I didn’t like Adam. I loathed Adam. I loathed him in the way that one loathes their most vivid memory of being embarrassed, heartbroken, and humiliated. The kind of memory that follows you into adulthood and echoes through the corridors of your entire existence.” I mean, that paragraph resonated…as did most of Miranda’s tart observations and retorts she dishes out to her siblings, Adam, and the hilarious villain-turned-ally event planner, Candace.

In lieu of the cute older characters I normally enjoy in a story, this one featured the reliably disastrous and prone to eat anything goofy dog. Puck makes for great scene stealing laughs and bonding moments between this couple. There is also a fun-loving lumberjack-looking hipster book agent that is Miranda’s BFF, named Ian, and he’s as much a scene stealer as Puck, just saying. One hopes that he will also receive his own book. In fact I would read any other love story of any of the other characters in the book…anything in order to be able to visit the Bard’s Rest again. In fact, I vote this town actually be created as an ode to the great man himself, complete with competing mainstages, actors and village people, and the pun-riddled establishments that I wanted to visit (especially if there were food stuffs involved.) I will be there with bells on.

Miranda is everything I love in a heroine: witty, hilarious, but a little self-deprecating. Adam is kind, funny, sexy, and everything you’d want in a modern hero. Now some readers may wonder why Miranda doesn’t cut Adam a break–I mean, it was high school, after all–but I always figure those readers enjoyed high school more than I did…or my friends did. I figure readers fall into two categories where high school is concerned: those who are willing to attend a high school reunion and those who won’t even friend people they went to high school with on Facebook (let alone attend any reunions.) If you fall into the latter category as I do, this book is for you. Miranda is your heroine; Adam is your wish-fulfillment of what you wished had happened to rectify that time called high school teenage angst. But if you’ve already paid for your therapy and believe we should all not be acting like high school teens any longer (i.e. needless drama and grudges), you may think Adam deserves someone a little better (even though Miranda does grow and become a very worthy heroine, IMO.) In fact I think the author does a great job of creating several “difficult” women to stroll the pages of this book, making them annoying but loveable, making me yearn for all their stories. Even Portia’s. I cannot wait to see what this author does next. Well done.

I would say more–but it would mostly be every single quote in the book I found hysterical, which we do not have time for–so I think it would be better served if you just picked up your own copy and fell in love with Bard’s Rest.