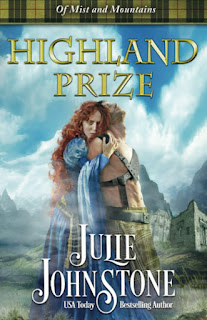 Duty demands he wed her. A vow requires him to hunt her. Desire compels him to protect her.For a man who has no intention of wedding anytime soon, if ever, Thor MacLeod finds himself submitting to an unwanted marriage in one moment and obliged to hunt down his new wife in the next—all in the name of protecting his family. The task seems simple enough: find the lass accused of treason who stabbed him and then fled after their vows, return her to his commander, and then have their union dissolved. But nothing is ever simple when it comes to beguiling lasses like the fiery-haired woman he wed. Though he made a vow to never again be led by desire, the woman is proving herself to be brave and true, and suddenly, Thor is forced to question if what he feels is more than yearning, and if so, what price is he willing to pay for matters of the heart.Traded by her father to resolve the taxes he owes the king’s son, Isolde Fitzalan’s biggest concern is protecting herself and her younger sister. So when her sister is sold off to a lord by the king’s son and Isolde is offered the chance to discover her sister’s whereabouts in return for wedding a stranger, she reluctantly agrees. But just because she was obliged to take the Highlander as a husband doesn’t mean she intends to keep the warrior around. The one thing life has taught her about men is that they cannot be trusted. Yet, when the choice is life or death, and she finds herself betrayed at every turn, putting her faith in the seemingly honorable man may be the only way to survive.
PJ's Thoughts:
If Medieval romance is your jam, Julie Johnstone is an author you should definitely be reading. For my money, she's one of the best authors writing romance set in that era.
Johnstone plunges readers straight into this story like a pack of race horses breaking from the gate. The danger is immediate, the consequences dire, and the pace never slows. I was fully engaged before the end of the first chapter and unable to put the book down until I reached the final word. I should know by now not to plan anything other than reading on the days one of her books arrives.
One of the things I most enjoy about Johnstone's books is her ability to set the stage, immersing me in the geographic, political, and human landscape of 14th century Scotland. She then creates a cast of characters with multiple layers who draw me in, engaging my emotions, heightening the stakes of the tenuous circumstances they almost always face, and the life-altering, sometimes heartbreaking choices they must make. Her characters feel real and authentic to the place and time in which they lived.
There's a touch of magic in this book that feels appropriate for a story set in the 1300's Scottish Highlands where witches, seers, and more were accepted as a normal part of life, feared but also valued for their skills.
As for Thor and Isolde, these two really tugged at my heart. I enjoyed the push and pull of their relationship as they gradually evolved from adversaries to friends to more. Their emotions felt very organic and real. I loved the respect, care, and love that very slowly grew between them as layers were peeled away, vulnerabilities exposed, and trust strengthened. Theirs was a love that was unexpected, threatened, and all the more appreciated for the lengths they had to go to secure it. I was with them every step of the way.
Highland Prize is the third book in Johnstone's Of Mist and Mountains series but stands well on its own. I haven't read the first two books yet (though I downloaded them the minute I finished this one) but I never once felt as though I was missing something by beginning with book three. I did discover (to my delight) around the 80% mark that Thor was the son of one of my favorite couples from Johnstone's Highlander Vows - Entangled Hearts series. No wonder I liked him so much! And now I'm wondering if books one and two feature second generation MacLeod's as well. I can't wait to find out!
Posted by pjpuppymom at 4:00 AM