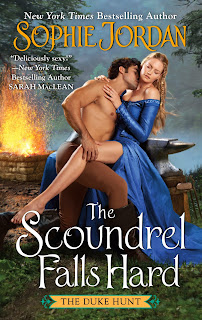 A devil’s bargain burns the hottest….

For years, fiercely independent Gwen Cully has worked as the village blacksmith, keeping her family’s business going. But when a local rival threatens her livelihood, Gwen has nowhere to turn ... until a devastatingly handsome fugitive takes shelter in her shop and sparks fly.

Unrepentant rogue Kellan Fox’s entire existence has been a dangerous game of deception that leads him into a fight for survival—and straight into the arms of a tall, fiery beauty. When Gwen protects him from an angry mob of villagers, Kellan sees the perfect solution to both their troubles. A marriage—in name only—that will last a single year.

Only a marriage of convenience can’t hide their searing attraction. It glows hotter than Gwen’s forge and reaches deep below the tempting mask Kellan wears for the world. With every sizzling glance and scorching kiss, Gwen surrenders more of herself to the molten passion she finds in Kellan’s strong embrace. But can she ever truly trust her heart to a scoundrel?

A marriage of convenience between a fiercely independent female blacksmith and a charming con man caught in the act? With a setup like that, I couldn't dive into this one fast enough! Okay, so I had to suspend disbelief a bit in the opening pages of the book when our heroine, a fine, upstanding member of the community proposes a marriage of convenience with a thief she's just met but Jordan sells it. At least, she sold it to me. Both Gwen and Kellan have valid reasons for their decisions and who am I to scoff when I know this author most likely has plenty of delicious fun in the offing?

I don't think I've ever read a book with a blacksmith heroine before and, let me tell you, I loved her. Gwen is strong, fierce, hardworking, and unapologetically herself. She runs her own forge and suffers no fools, especially those trying to overtake her business. She could not be a more perfect match for Kellan, a man who has never done an honest day's work in his life but who has enough goodness in him to perhaps realize there could be another way...a better way.

Maybe I'm just a sucker for a charming con man but I was pulling for Kellan from the get-go. I love that he was immediately attracted to Gwen, recognizing her statuesque beauty (when her fellow townspeople all consider her masculine and "odd"). I love that he didn't try to change her or take charge. He appreciated all of her qualities, especially her strength and fortitude.

I also enjoyed the changes brought about in both Kellan and Gwen as a result of their time together. The deepening desire between them sizzles, catching Gwen off guard and opening up that vulnerable, feminine side of her that she's never explored (If you're a Sophie Jordan fan, you already know you're in for some amazingly sensual, organically placed scenes). As for Kellan, his growing feelings for Gwen give him the incentive he's never had to make something of himself that would make her - and him - proud. Of course, there are obstacles along this path that challenge his convictions - and hers - but readers do get their happily ever after in the end.

Speaking of the end, that really is one of the only quibbles I have with this book. The final chapter felt like a rush to the conclusion. I would have enjoyed a bit slower pace with more discussion between Kellan and Gwen, more emotional depth, before they are sent happily off into the sunset. But that's me. Others may not feel the same.

The Scoundrel Falls Hard is the third book of a series but stands well on its own. There's an overarching theme for the series but I never felt lost or confused for having jumped in at this point. I will, however, be buying the first two books as well as the fourth when it releases. If you're in the market for a refreshingly original historical romance with engaging characters, a fast-moving story, and a happy ending, give this one a try.