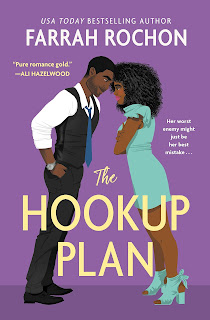 Successful pediatric surgeon London Kelley just needs to find some balance and de-stress. According to her friends Samiah and Taylor, what London really needs is a casual hookup. A night of fun with no strings. But no one—least of all London—expected it to go down at her high school reunion with Drew Sullivan, millionaire, owner of delicious abs, and oh yes, her archnemesis.Now London is certain the road to hell is paved with good sex. Because she’s found out the real reason Drew’s back in Austin: to decide whether her beloved hospital remains open. Worse, Drew is doing everything he can to show her that he’s a decent guy who actually cares. But London’s not falling for it. Because while sleeping with the enemy is one thing, falling for him is definitely not part of the plan.
PJ's Thoughts:
Farrah Rochon not only hit it out of the park with the first book of this trilogy, The Boyfriend Project, she then continued to up her game with book two, The Dating Playbook, finally wrapping things up with The Hookup Plan, my favorite of the series.
Enemies to Lovers is one of my favorite romance tropes and Rochon takes it to new heights with Drew and London. When uptight workaholic London finally decides to take her best friends' advice and indulge in a little one-night stress relief, who does she choose? None other than her high school nemesis, chief rival for valedictorian, current (surprise!) decider of her hospital's fate, and, yep, rocker of her sexual world. And if that isn't bad enough, the more time she spends with Drew, the more unwanted feelings seem to grow. Does she know how to choose them or what?
As I mentioned earlier, The Hookup Plan is my favorite of what is an exceptional trilogy by Rochon. London is such a complex character. I loved getting to know her better, uncovering the many factors that motivated her, watching her confront her emotional demons, evaluate her shortcomings, go to the mat for her patients, and reshuffle her priorities (learning that self-care is just as important as caring for others).
Drew captured my affection pretty quickly. I loved that he had secretly crushed on London in school. It was fascinating to learn his perspective on their "rivalry."  He was pretty awesome but not perfect, carrying his own emotional baggage. I liked that he and London both had work to do on themselves. Their chemistry was fire but it was the conversations between them as they slowly lowered their guards, showed more of themselves, and began to form a real friendship that endeared them to me. I was cheering them on all the way to the finish line.
The friendship among London, Samiah, and Taylor continued to remain strong and supportive. These women are there for one another, celebrating the happy times, commiserating during the sad times, and not hesitating to apply a forceful nudge when necessary. They are the definition of friend that we should all be so lucky to have in our lives.
If you enjoy contemporary romance with humor, emotional depth, and strong friendships, pick up a copy of The Hookup Plan. It can be read as a standalone though I do think you'll enjoy the trilogy more if you read the three books in order.
~~~~~~~~~~
Have you read any of the Boyfriend Project books yet?
One randomly chosen person who posts a comment before 11:00 PM, EDT, August 6 will receive a copy of The Boyfriend Project.
One randomly chosen person who posts a comment before 11:00 PM, EDT, August 6 will receive a copy of The Dating Playbook.
*U.S. only
*Must be 18
*Void where prohibited
Posted by pjpuppymom at 5:00 AM