THE ROAD TO CHRISTMAS

From USA TODAY bestselling author Sheila Roberts, three generations of travelers embark on a Christmas road trip filled with humor and heart, set against the snowy mountains of Washington State. 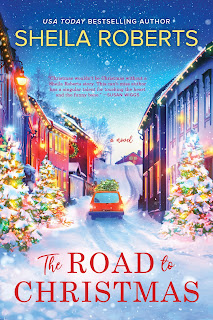 Michelle and Max are not planning on a happy holiday. Their marriage is in shambles and the D word has entered their vocabulary. But now their youngest daughter, Julia, wants everyone to come to her new house in Idaho for Christmas, and she’s got the guest room all ready for Mom and Dad. Oh, joy.

Their other daughters, Audrey and Shyla, are driving up from California and hoping to meet a sexy rancher for Audrey along the way. What they don’t plan on is getting stranded on a ranch when the car breaks down.

The ones with the shortest drive are Grandma and Grandpa—also known as Hazel and Warren. It’s still a bit of a trek, and Hazel doesn’t like the idea of driving all that way in snow, but Warren knows they’ll have no problem. They have a reliable car—and snow tires and chains if they need them. They’ll be fine.

Surprises lie in store for all three sets of intrepid travelers as they set out on three very different adventures, all leading to one memorable family Christmas.

Audrey and Russ sat talking late into the night, long after everyone else had gone to their respective bedrooms. They covered everything from crazy childhood experiences to higher education, both in and out of the classroom. They shared classes they’d liked most in college—American literature for her, geology for him— favorite movies and what books they were reading. His reading was as all over the map, like hers. He enjoyed everything from Carl Sagan to Kurt Vonnegut.

She cocked an eyebrow.

“What?” he said defensively. “Are you a reading snob?”

“Talk about fantasy,” she scoffed. “Jack Reacher can outfight and outthink mortal men, plus he wears the same clothes for days but he always finds a woman willing to fall into bed with him when he rolls into town all scruffy and stinky.”

“And how would you know about his hygiene habits?” countered Russ. One corner of his mouth hitched up.

Busted. “Okay, I’m not above reading an occasional bit of male fantasy,” she said with a shrug, mirroring his smile. “Those books are fun. And I have to admit, they’re a great lesson in self-defense. So don’t mess with me, or I’ll gouge out your eyeballs.”

He laughed. “I guess we all enjoy some escape once in a while. So when you’re not slumming, reading male fantasy, what else do you read?”

Audrey named the titles of several favorite nonfiction books, including one about the history of Uber as well as her Michio Kaku book.

“Yeah, I read that one by him,” Russ said. “Fascinating stuff. But what do you read when you want to escape? Any favorite authors?”

She rattled off the names of her favorite romance authors, which ranged from Brenda Novak and Susan Wiggs to Jane Austen.

“I’m afraid I don’t know any of them. Well, except for Jane Austen.”

“They write romance novels.” She realized she was feeling a little like someone confessing to a drug addiction. Probably because she’d just dissed his favorite escape reading.

“Don’t judge. Even though I just did,” she added.

“Wouldn’t dream of it. We all need our fantasies, right?”

“I guess we do,” she agreed. “You don’t always get that happy ending in life. Maybe that’s why I like to read a good romance. Everyone should have a happy ending somewhere, and if you can’t get it in real life, you ought to at least be able to find it in a book.”

“I think you deserve a happy ending in real life,” he said.

Russ started playing with a lock of her hair, and she began to go all mushy inside. “Oh, yeah,” he said, his voice a caress. “You never know where you might find a happy ending. Or with who.”

“Whom,” she corrected absently. Did she really just say that? “Shoot me now. I’m doing it again, being the world’s biggest know-it-all.”

He chuckled. “Hey, I already told you what I think about smart women, so feel free to be yourself.”

Free to be herself. There were enough times growing up when she’d felt anything but. The teacher’s pet, the show-off, the oddball who loved doing homework and discussing the symbolism of Lord of the Flies and All Quiet on the Western Front with the teacher.

“Being smart is a gift. You should use it. And if somebody can’t deal with that, too bad,” said Russ.

“He was obviously all wrong for you.”

“Yes, he was,” she agreed. So his rejection shouldn’t have hurt. But it had.

“I, on the other hand, am a man who understands the importance of communicating properly.” He moved aside the lock of hair and skated his fingers up her neck, murmuring, “How’s this for a grammatically correct sentence? You have the softest skin.” He touched his lips to the sensitive spot behind her ear and sent tingles shooting in all directions.

“There you go. I’m improving already. Next time I have to write a business letter I’ll have you proofread it.”

That certainly sounded like they were more than simply two people whose paths were temporarily crossing. “Always happy to help,” she said as those incredible lips made their way to her collarbone, spreading holiday tingles as they went.

“I think I’m going to need a lot of help,” he said, planting another kiss. “What do you think?”

He smiled at her and then turned his attention to her lips, sliding a hand across her middle as he kissed her.

The kiss left her almost breathless, but she managed to say, “I can’t believe this is happening.”

“What?” he murmured, nuzzling her hair.

“This. You. All from having a flat tire.”

“You’ve got to listen to all those pillows and wall hangings you see in the stores. Believe.”

She did. She was tingling all over when she finally made her way to the guest bedroom. Gram loved to quote Bible verses to her, and one of her faves said that everything worked together for good. Everything certainly seemed to be, for Audrey. She was now very happy that they’d had that flat tire, that there’d been no rooms available in any of the town’s motels. And she was especially happy she’d gotten dumped because what was developing with Russ Livingston was so superior to, so much more than what she’d had.

“Merry Christmas to you,” Shyla greeted her when she slipped into the room.

“Do I detect whisker burn on your neck?”

“You detect nothing,” Audrey said firmly.

“You lie. He really is a great guy, and a great match for you.”

“Well, I’m not going to get my hopes up,” Audrey said.

She sure did lie. Her hopes had climbed even higher, reaching the point where they could have joined the Hubble out there in space.

In spite of that, she still felt shy the next morning when it was time to leave. Vera served them a French toast casserole with blueberries along with high-octane coffee and promised to share the recipe, making sure she got Audrey’s information in her phone.

“You girls really do have to stop by on your way back through, even if it is only for a quick visit,” she said as the family walked them out. “We’ll be disappointed if you don’t.”

Tom wished them a safe journey, then went to the barn to muck out stalls. Rand, too, said his goodbyes and went to help his dad, and Shyla moved off to warm up the car, Vera walking with her. That left just Audrey and Russ lingering on the front porch.

“You sure you want to see us back again?” she asked.

“What do you think?” he said, lowering his voice. “I’m not taking down that mistletoe anytime soon, that’s for sure. I want to keep seeing you. Unless you’re having second thoughts?”

“After last night? You gotta be kidding me.” He slipped his arms around her waist. “Audrey, I fell for you the minute I saw you standing on the road. I’m still down for the count, and I don’t want to get up.”

“And he shouldn’t,” Shyla said after Audrey was in the car and they were on their way. “He’s perfect for you, you know.”

“Still being cautious, I guess. Everything that’s happened almost seems too good to be true.”

“The way he looks at you? Don’t worry, it’s true. Ho ho ho! Thank you, Santa and Shyla,” Shyla said as they turned onto the highway. “And now, on to the next adventure.”

Audrey’s phone pinged with a text. “Julia’s having a snort,” she reported.

“Tell her to chill,” said Shyla.

“On our way,” Audrey dictated to her phone.

“Since when are you so nice?” Shyla teased. “Never mind, I already know. Love has mellowed you. Seriously, I’m happy for you, sissy. It’s about time. I think you’re going to have a happy new year.”

“Not to mention a great Christmas,” Audrey added.

Shyla began singing, changing the lyrics of “Deck the Halls.”

“We are on the road to Christmas.”

“Russ’s family’s gonna miss us,” Shyla sang with a grin.

Audrey joined her for more fa-la-las.

What a crazy road they had been on, but what a wonderful ride. 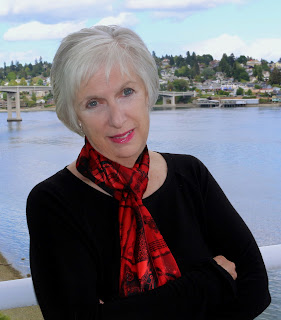 Enthusiastic about all things Christmas, Sheila Roberts is the author of almost 50 novels, including ON STRIKE FOR CHRISTMAS, which was made into a Lifetime Network movie. Another book of Sheila’s, adapted for the small screen, THE NINE LIVES OF CHRISTMAS, is a perennial Hallmark channel favorite. She has sold more than three million copies of her novels. Before launching her author career, Sheila owned a singing telegram company and played in band. A cancer survivor, she resides in Washington with her husband, who is also an author.

For more information about the author, visit www.sheilasplace.com.