Review - - The House on Blueberry Lane 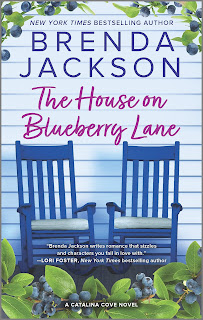 All he needs is a second chance

All she wants is no strings attached The biggest mistake of Jaye Colfax’s life was letting Velvet Spencer leave. For three years, they were together exclusively and it was great—at least for Jaye. But Velvet wanted more. Jaye wouldn’t commit to anything because he just didn’t believe in love or marriage. Tired of waiting, Velvet left him without so much as a goodbye. Only then did Jaye realize he’d been too proud to admit he loved her. But it was too late—his stubbornness had cost him the love of his life.

It took Jaye two years to find where Velvet had gone. Now, he’s come to Catalina Cove to prove his love and win back her heart. He’ll do whatever it takes, even buy the local bank and move in next door. But will Velvet have him?
PJ's Thoughts:
Brenda Jackson returns to Catalina Cove with an emotional, and steamy, story of second chances. I became intrigued by Velvet and her mysterious background while reading book five, One Christmas Wish so, of course, I was excited to learn book six would be her story. It was another satisfying visit to the place, and with the characters, who have made Catalina Cove one of my favorite fictional stops.
Whether this is your first, or sixth, visit to Catalina Cove, Jackson's descriptions bring the small bayou town to life. Each visit makes me wish even more that it was a real place. I want to walk the path along the river, start my day with the mouth-watering blueberry muffins at the Witherspoon Café, sip a cold beverage while watching the sun set, indulge in the daily soup special at the Green Fig, dig into delicious, freshly-caught seafood, and hang out with all my favorite Catalina Cove residents.
Let's talk about those residents. While each book focuses on a primary couple, Jackson surrounds them with a lively secondary cast of characters who bring friendship, conflict, and intrigue to the story. It feels very much like actually living in a small town, with all it's quirks and complications.
And then there's our main couple, Velvet and Jaye. He's set on earning a second chance. She's set on flipping the romantic tables, offering him a no-strings affair with hearts definitely not engaged. He broke hers once; she's not going to give him an opportunity to do it again. I enjoyed their journey. While they reconnected sexually almost immediately, the author took her time with them emotionally. Trust lost takes time to recapture and Velvet needed that time - along with Jaye's actions - to reach a point where she was willing to reopen her heart. It was worth the wait.
As I mentioned earlier, The House on Blueberry Lane is the sixth book in Brenda Jackson's Catalina Cove series. While characters from earlier books make appearances in this one, and Velvet was introduced in book five, it can definitely be enjoyed as a standalone. However, don't be surprised if once you finish The House on Blueberry Lane, you immediately search out the other books in the series. I recommend them all.
Posted by pjpuppymom at 5:00 AM