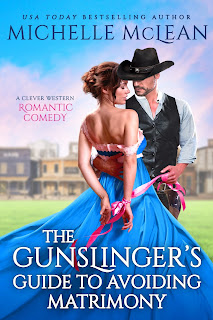 At the ripe old age of twenty-eight, desperate-to-retire gunslinger Adam Brady has exactly two rules. And one of them is never, ever get married. So he’ll be danged when his dreams of permanently avoiding the bounty hunter on his tail in Desolation, the only town where notorious men like him can find respite, comes with one helluva string attached. The town has a new rule: gunslingers welcome—if they get a job…or marry.Without realizing it, Adam stumbles into a big town wedding and accidentally marries Nora Schumacher, a sassy-mouthed mountain of a woman with legs as long as his wanted poster. So what’s a gunslinger to do but get himself unhitched and find a job. Any job. Except Adam keeps getting fired, one odd circumstance after another. And he’s running out of options.Desolation was supposed to be his safe haven. Except, he’s not only running from his past but from the irresistible woman he married. And worse, he’s finding that he rather likes the enticing, if damnably independent, wife of his. But some men just aren’t the marrying kind. Only, if he leaves, his own life won’t be worth living. If he stays, he puts the lives of his newfound family and the woman he loves on the line. So much for Desolation being the answer to all his problems.
PJ's Thoughts:
This is the book I had no idea I needed but am oh, so happy I found. I was grinning a few pages in, laughing out loud before the end of Chapter One, and head over heels in love the rest of the way.
If you're in the mood for a feel-good western with snappy dialogue, laugh-out-loud humor, sweet emotion, meddling townspeople, characters you can cheer for, and a story that unfolds in your mind like a movie on the big screen, this is the book for you.
It seems that many of the books being marketed as "Rom-Com" these days are anything but. That is not the case with this one. Labeled as a "Clever Western Romantic Comedy," it's a story that delivers on all points. The pace never slows, McLean's comedic chops are on full display, the characters are engaging, and the "OMG, what's next?" storyline kept me eagerly flipping pages from start to finish. I lost count of the number of times I had to stop and share lines I was laughing over. One of my favorites is this exchange between Adam and Nora when Adam declares, "Darlin', I've wanted you from the moment you dropped a body at my feet." It says so much about this couple and their hilarious "courtship."
While the humor is plentiful, McLean balances it nicely with a depth of emotion that tugs at the heart. There were more than a few "ahs" to go along with all of the "hahas." I also loved how she wove the citizens of Desolation in and out of the story, showing us bits and pieces of their personalities and dropping hints here and there that make me want to know more about them. Here's hoping they all have a story planned for down the road because I want more, more, more of Desolation and those who call it home.
This is the second book in Michelle McLean's Gunslinger series. It can be thoroughly enjoyed as a standalone (as evidenced by my unrelenting laughter) though the main couple from book one, Hitched to the Gunslinger, do have large roles. If you're like me, you'll be downloading Gray and Mercy's story the minute you finish this one.
Posted by pjpuppymom at 4:00 AM